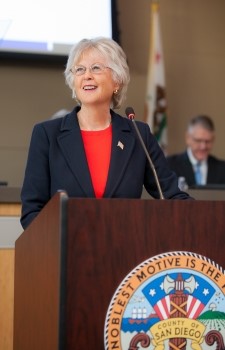 By Ben Franklin
April 16, 2019 (Julian) - Since the beginning of the dissolving of local volunteer fire departments the number of firefighters and emergency first responders available in an emergency has gone through a drastic and unacceptable reduction. At the beginning of the process there were over 600 volunteers available in the rural areas of San Diego County. While I'm certain that it's possible to improve any system, no attempt was made to improve, instead, decimation has been the goal in rural San Diego County.

I personally believe that the role of government and leadership is to look beyond the pretty words that are often laced with fallacy and actually ensure that we take action to strengthen our communities and make them safer -and not just superficially or on paper. Rural San Diego county is much less safe than it was just a few years ago. When people have a role and a responsibility and understand that others depend on them as volunteers did, they stretch farther and reach higher to support their communities we create an opportunity for pillars to be grown in each community. Apathy and dependence are not treasures, but do create an unsustainable machine that gobbles up good will and creates a money sucking monster who is quickly to full to move to meet the needs of the people feeding it.

I've spoken to people from many of the communities that were taken over in the past few years. Sadly, with one exception, the insistence on using contracted firefighters who operate under strict union rules had stripped communities of the opportunity to take responsibility for their neighbors and to be role models in promoting safe communities. There are many heartbreaking examples, but they are silenced by those who wish to gain financially from eliminating volunteers. Response times in many areas have increased and can't be completely covered up despite fancy number moving. Homes have burned with unacceptable wait times for help while ill- unprepared citizens attempt to rescue people and animals, becoming injured or endangering themselves in the process. People have died alone waiting for help. Children sat alone in a vehicle with their dead aunt and mother waiting for help from an unstaffed station. Yes, there is something nice about thinking that the government will provide for all of your safety needs but this approach weakens communities and is a Potemkin's villiage.
The legacy of lies is not going to keep us safe. Please reconsider dissolving our department and help create a brave world where it isn't big government against a little town of heroes and a fallacious hope in a system that cannot succeed.

As a retired FF who has a historical track record in San Diego City and County, I remember the volunteers in San Diego areas like Campo and at times interacted with them. Back then I had mixed emotions on whether volunteers were a worthy entity. I never had cause to criticize them. As time went, so did those volunteers but the Unions did not and today, they are a power political force everywhere. I believe if the real world facts like cost, budget, dependable equipment, methods of notification, manpower, response times etc. were evaluated as in this current take over; they we could have facts to help all of us to see what really is happening. Are there any?