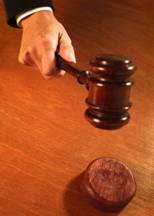 April 14, 2014 (San Diego's East County) - On April14, evidence was completed in the murder trial of Kassim Alhimidi. Jury instructions were scheduled by Judge William McGrath for 2:30 p.m, and closing arguments will begin April 15 at 9 a.m.

There was testimony this morning from D. Ahmed, who deals with issues related to domestic violence and arranged marriages through an organization she heads called "License to Freedom." She testified that in November, 2011 she met with Fatima (daughter of Kassim Alhimidi and Shaima Alawadi) at Cajon Valley High School . Fatima said she was planning to run away to Las Vegas to avoid an arranged marriage.

She hoped to join  other former students involved with arranged marriages who were already in Las Vegas, and wanted to to know if Ahmed's organization had any funds to help her escape. They did not. Fatima mentioned that her mother had a supply of gold, and that if she could get just  "one small  piece," she could sell it and have the money to go to Las Vegas.

When questioned about this situation earlier, Fatima  denied it happened.

Jurors were shown a photograph of  a "Little Caesar" pizza box resting on the arm of a couch in the back yard of the crime scene, and a photo of a box on the floor next to the couch. They were taken by an El Cajon police officer the day of the attack. Were there two boxes, or one? Officers testified there was just one, but apparently didn't check for fingerprints.

Why is this an important issue? The boyfriend of Fatima  was  at that time working for Little Caesar's. Was he in the home at the time Alawadi was attacked?

A  witness for the defense was Richard Whitman, an officer for 29 years with the ECPD. He responded to a call on November 3, 2011 of a report of two people possibly having intimate relations in a car. He saw the couple in the backseat, and learned  they were Fatima (then 17, and Muslim) and her 21-year old boyfriend, a Christian Chaldean.

Because the girl was underage, her mother was called. When Whitman was asked the name of the mother, he said he didn't recall, but then checked his report and remembered that her name was "Shaima Alawadi." The mother said the young man had been "bothering" her daughter, and she was considering  getting a "restraining order" against the young man.

Mother and daughter left, and Whitman was later informed that the daughter had jumped out of the car. He went to the scene and spoke with  the mother and daughter. He learned that the daughter said "I love you, mom" and jumped from the car when it was moving about 35 m.p.h  The injured Fatima was taken to a hospital, where Whitman said she was placed on a 72-hour hold, because her actions were interpreted as a suicide attempt, and she was considered a danger to herself or others..

More details will follow about trial testimony, as well as about closing arguments.