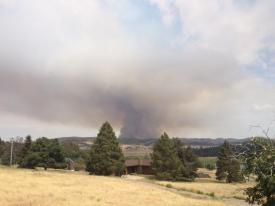 November 2, 2013 (Cleveland National Forest) – It’s been ten years since the Cedar Fire. Now it’s the beginning of Deer Season.  I put this video together years ago from a Power Point on the Cedar Fire from Cedar Gorge, in the first hours and the weeks and months to follow. For the milestone remembered this week, here's another moment, remembering that last night from a world we left behind.

As mentioned, one doesn't really say Happy Anniversary in this case.  The Cedar fire was tragic and terrifying.  But it was some odd beginning or newfound courage, internal evolution, all things that do in some odd way, like the wild lands they sprang from, bear celebrating and passing on.

In the wake of the SDG&E Master Permit renewal, we hope the public outcry will demand at last the investment to put power lines underground as much as possible, or even better, the infrastructure be migrated to the city altogether.

The Cedar Fire was started by a hunter who ran out of water on one of the hottest, driest weekends in one of the driest years on record.  He wasn't an out of control "arsonist.”  He was no mindful "criminal," not that that was ever made clear through any of the long media coverage that followed.  Not the wisest of choices; once dehydrated, his ability to think squarely fell away quickly.  The real responsibility came at the front end, not unlike the first step in the barroom door.  How was he to know?  Well I don't know, not every hunter in the forest starts the largest fire in California history.  Granted he could have done better.

But what if the next hunter doesn't?  We all should do better on the education end.  The Forest Service?  Well that would be logical.  But what if they don't, either?

Last spring I gave water to MANY people in the backcountry that had not brought enough.  Three Sisters Waterfall is a living shrine to the gap in our interface with nature as well as the solid testimony to insatiable yearning to be there.  Was the man that lit the fire any different?  I've maintained it wasn't just him; anyone without some skill set could have found himself or herself in that predicament.  Dehydration usually comes as a surprise.  Avoiding it “happens" hours before.  As a culture, we've lost our way in the woods.