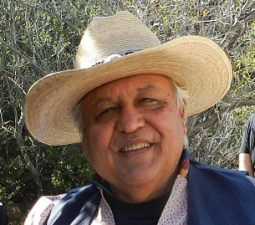 March 12th, 2015 (Viejas) - A huge throng of people from all over came to say goodbye to Roy Cook in the gym at the heart of the Viejas Reservation on Saturday.  Roy died suddenly and we are overwhelmed with a sense of loss.  It was comforting to hear from so many friends how they were touched by his magic.  The prayers, the songs, the Honor Guard, the Soaring Eagles, the drums building up to heaven and the wailing releasing our anguish.  We cried in each other's arms.

The first day I met Roy Cook was at the groundbreaking ceremony for the Jamul Casino in 2005.  I was proud and happy for the Jamul Indian Village and perplexed by the angry faces marching with signs on the street.  Roy sensed the vicious opposition would eventually delay the project and he was right.  He told me some of the history of the Jamul Band.  He said they were the poorest of the poor.  Their little village had dirt roads, their homes had dirt floors.

That encounter changed my life because Roy spoke with such certainty and compassion I began reading everything he wrote.  The words lifted off the pages like they were written in my heart.  Being indigenous became more than a card I carried in my wallet.

I last saw Roy a few weeks ago at the first ever Native American Student Alliance Powwow at Cuyamaca College.  He was glowing with pride.  I hadn't talked with Roy much since that day in 2005 but I realized I must have read everything he ever wrote (no small task).  I mustered up the courage to tell Roy how much he has meant to me over the years.   When I turned around he was gone.

This is what Roy wrote about that Jamul Casino groundbreaking ceremony nine years ago.

“Jamul, at noon December 10, 2005, is shimmering in the sun. Warm emotions fill the hopes of many of the: visitors, supporters, Tribal members and officials attending this American Indian gathering.   Jamul Tribal land is Six acres of uneven ground. Uneven hopes and dreams mark the struggle to make a new future for Jamul. Looking across the dips and valleys of this Federal Reservation land there and over there, in the corners of our vision, we see the bright gems of hope and prosperity in the soil and dust that will support the basis of the Jamul Tribal future.  There will be a new Jamul Casino for the San Diego economy.”

Referring to the protestors he wrote:

“There is an irony to the day.  Non-Indian rag-tag protestors straggle along the Jamul Reservation fence line. It is their First amendment right to voice their opinions. But it causes one to wonder about all those homilies regarding Horatio Alger and America being the land of opportunity.  All three past and present Jamul Tribal Chairmen are U. S. Military combat veterans.  We served this Nation for the freedom to be what we are.  Indian Nations ask for nothing more than the opportunity to succeed but certainly nothing less.”

“America, America we are still here.  We are American Indian Tribal people.  We stand for this land.  We bleed for this land.  America, too often is like an unruly child unused to its power and under the illusion that it is the parent of this land.  This is Indian Land, eons older than redefined governments in the process of determination.   America we are still here.  We live RESPECT: The tribe has only four acres open to construction.   A tribal cemetery and Catholic chapel take up a third of the reservation.

America, we have been to your schools and served in your military to defend the ‘American’ way.  It is our turn to step up to the economic scooter and take it for a spin. Jamul will have a casino soon and all will benefit economically from this action.”

We can add Prophet to the list because the tiny Indian Village in Jamul will indeed soon have its “spin on the economic scooter” and the spirit of Roy Cook will be there when it happens.