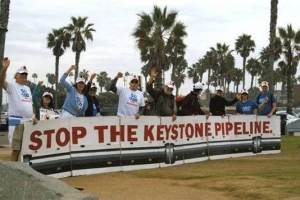 Frustrated and angry over a lack of political action on climate change, our millennial generation is not tolerating an ineffectual Congress or president.  This 18-34 year old group in the U.S. are 74 million strong and when the worst happens will suffer the most from climate change. With little representation in Congress, where the average age is 60, they are looking to civil disobedience as a strategy to create the political will to address this threat.  This will happen not only in our nation’s capitol but on the streets of major cities across the nation, including San Diego.

The fight over Keystone is really about a generational shift in our energy paradigm and how we will survive the 21st century.  It concerns the wealth and jobs that the fossil fuels industry creates, how it has weaved itself into all of our lives and pulled us into a formidable dependency.  Alberta is determined to mine its bitumen tar with or without Keystone, but the pipeline has morphed into a worldwide symbol of the struggle to confront climate change.  With a growing foreboding, we are sensing our carbon lifestyle may be lethal to future generations and if they are to survive it is incumbent on us to accelerate efforts to develop other energy sources.

From Washington, D.C. and Nebraska courts, this conflict now swings to Canada, where the Alberta government owns 81 percent of its oil sands and has a long list of investment partners. Besides multinational corporations, one of its biggest sources of investment capital for mining is China, our planet’s largest producer of greenhouse gases.  Alberta looks to collect $1.2 trillion in royalties from its oil sands over the next 35 years, but has increasingly drawn the world’s attention because of the massive girth of pollution from the mining and burning of bitumen tar.

Canada also faces a disenfranchised youth, who feel their voices and futures have been diminished by the enormous profits bitumen tar sands portend.  They are joined by First Nations aboriginal tribes who share the same political paucity and frustration. Despite the economic benefits of bitumen tar mining on their lands, First Nations people are taking a grim view of irreversible health and cultural damage.  It is a seminal decision for First Nations to continue its relationship with Canadian oil interests and on a larger scale, analogous with our world’s factious accord on reducing the role of fossil fuels in our lives.

The world’s climate scientists essentially agree that if left unchecked, anthropogenic CO2 will worsen extreme weather, raise sea levels and create mass extinctions from a profuse array of environmental changes.   Many acknowledge that climate deniers are fed propagated ignorance by fossil fuel strategists as part of a misinformation campaign, creating a set of beliefs not easily changed.  It creates a polarized electorate, leaving the issue to develop worst case scenarios before action is taken.

In moderation, fossil fuel usage might not have posed a serious threat, but we have moved well past that threshold.  Our burning of fossil fuels produces around 33.4 billion metric tons of CO2 per year and world energy needs are expected to rise about 40 percent over the next 20 years.  CO2 has reached proportions in our atmosphere not seen for about 15 million years, when there was little land ice and the ocean was 100 feet higher.

There is a way forward.  In time, renewables can generate jobs lost in the fossil fuels industry and will sustain our lifestyles. We can consider Generation IV nuclear energy, reportedly much safer than existing technology. Some strategists look to a carbon fee and dividend system that can increase the viability of new renewable energy sources, as well as a carbon import tax on products from countries like China.

As Keystone falters and tar sands mining provokes mounting protests, our nation is compelled to end political bickering and accede Millennials a more powerful voice on climate legislation. President Obama must grasp the significance of this moment, deny the Keystone permit and tell the world his decision has nothing to do with the pipeline and everything to do with leadership.