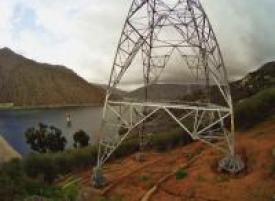 October 23, 2012 (San Diego’s East County)--Late last week, SDG&E filed a permit request with the California  Public Utilities Commission (CPUC) and  sent an announcement to several local residents of a replacement project for five 69 kV lines which currently circle the county at the end of last week and filed the project with the CPUC.  http://www.sdge.com/regulatory-filing/3792/application-sdge-permit-construct-cleveland-national-forest-power-line

PLEASE review the link above and send comments to the CPUC. We have a scant 30 days to turn this around and expose SDG&E for not only gaffing off environmental quality, but probably far more important this time they are side stepping basic civil rights. Tell the CPUC they must respect the US Forest Service planning!

This project would cost rate payers half a billion dollars.

The proposal was submitted to the CPUC late last Wednesday. When I called the Forest Supervisor and the District Ranger on Monday, they had heard nothing about it. I have not heard back from the Forest Service to hear their response.

The local Forest Service was rail roaded into the south route of the Sunrise Powerlink project late in the transmission game.  Now SDG&E is thanking them with blatant disrespect and disregard?

SDG&E’s project request aims to get a jump on the re-permitting process that has been ongoing for three years, as well as jumping in ahead of the release of the Supplemental Environmental Impact Statement (SEIS) for their Land Management Plan (LMP)  draft public commenting period due approximately in January.

The interesting thing is that SDG&E, unlike the US Forest Service, is asking the California Public Utilities Commission to approve the massive project without a hearing, without public comments, and without the approval of the Forest Service even though much of it is on Forest Service Land. The US Forest Service has been working on a comprehensive plan dependent upon the reevaluations that are a prerequisite part of the SEIS process. The SEIS was part of a 9th district court order.

In other words, given what we have to go on in what should be a public process, apparently since the US Forest release of their LMP scoping documents last May, SDG&E has been secretly creating this proposal that would bypass all oversight and ram this project in under the radar in a Federal Government jurisdiction where they do not have authority. -No oversight for golden eagles or wild mountain streams, or the vistas we love our backcountry for.

How can they expect the CPUC to grant a US Forest Service permit? How can they possibly assume to know what is at stake to the point they can just dismiss an entire Federal Agency? The district ranger did assure me that they cannot.

Of all of the pieces and parts of our Federal Government, the US Forest Service is arguably is one of the most publically facing, and publically endearing part of that public trust, that actually even contains language requiring consideration of comments from children.

It doesn’t stop there.

SDG&E claims this is for fire reduction and reliability.  This plan would not only replace the poles but also the conducting wire. They just completed a restringing of one of the 69kv routes and now they want to replace the whole thing, we presume at our expense?

The locals never get a rest.

They claim there are no impacts and everything is the same.  However, then they add that this could be a double conductor which means the poles have considerably more stuff hanging on them and potentially carry more electricity. “Carry more electricity” requires approval and a permit from the US Forest Service.   Did SDG&E assume that connected actions means slide in one piece at a time?

What kind of stuff?  Among other things, not only up to 6 upgraded “636” “ ACSS” wires about an inch thick configuring 69kv, and a .3 inch thick wire for 12 kV local distribution, but also the capability to add an additional 2 to 7 strands of 646 “ACSR” type wire of a more fire prone model configured for 12 kV.  This is particularly odd because both 636 type conductor wires are typically used for 236kv. Repeat, 230kV transmission wire used for 12 kV distributions. Sure.

Where have we heard this before?

The 230 kV transmission lines are the type that leave our  new massive substation atop an  otherwise undisturbed Bell Bluff Mountain across from Viejas, run the length of Bell Bluff going west and skirt the top of Pala Verde before going underground into Alpine and resurface to run the length of El Monte Valley.

Why would you need seven 12 kV lines where you only have one now? Remember these go through the Forest and remote county where land is not easily subdivided.   Frankly I don’t believe they are telling us everything.

What is more, their definition of NEPA required “connected actions” might be missing something as well.

They use this buzz word phrase liberally in their documentation defining it as that part of their permit request that is on private land.  Wait, isn’t that all part of the same proposal before the CPUC? After all they did send announcements to the public land owners they refer to as “connected actions”, --just not to the US Forest Service representing the action, a permit titled “CNF..”.

Someone might want to inform them that actually THIS proposal is the CONNECTED ACTION to the Sunrise Powerlink that they failed to disclose per the NEPA required “enough information to make an informed decision rules” back in 2008.(Unless you a minor reference to a full scale map of the back of their 10 thousand page EIS for Sunrise, “enough information”. )  Further if they are proposing this as an existing 69 kV only to put their big toe into a twin 230 kV expansion of the future they MUST disclose right NOW or they are breaking federal law.

Now, I just wonder why they are trying to jump in front of the Federal Forest Service with this proposal when there are only a few more months to go on the official plan? Gee, do you think they don’t want to have to disclose the real scope of the project or have to abide by the Forest Service Land Management Planning? Perhaps they want their own plan that applies only to them?

Since when does the state have this authority in the US Forest Service?   Who besides me remembers the year and a half wait on the Forest mitigations for Sunrise after the CPUC approval? Maybe they aren’t so patient anymore.

Much lip service has been given by our governor to streamlining the state California Environmental Quality Act or CEQA. Given their past performance I do not consider this plan a streamlining of CEQA, but more of a dodging of NEPA.  SDG&E refers to the EIR and the CEQA process in their permit request.   Someone should inform them that in the US Forest on Federal land it is called NEPA and an EIS, Federal policy, not state of California Policy.

Apparently SDG&E is lost in the woods.

Included in their proposal is a financial statement.  It appears they have considerable debt.  I wonder who is paying that?

PLEASE review the following and send in comments to the CPUC. We have a scant 30 days to turn this around and expose SDG&E for not only gaffing off environmental quality, but probably far more important this time they are side stepping basic civil rights. Tell the CPUC they must respect the US Forest Service planning. This proposal is illegal and should be refused. Please tell the CPUC that actions on US Forest Lands are the dominion of the US Forest and have to adhere to Federal Policy, not the impatient bullying, cowardly antics of SDG&E trying to intimidate the public with their contrived, greedy thinking.

(SDG&E seems to get their cue from the old guard of the past administration.  Remember, cowards and bullies at their core, fear most having to “feel”; -feel anything of beauty, or tenderness that could make them also feel vulnerable, perhaps the real cause of it all.    Sooo lay it on thick about the beauty of our back country and don’t accept this weakness from them. This stuff does not belong there. )

And if you think of it,  Thank the US Forest Service for taking a stand for the land this time-no doubt it is not easy, - and not yielding to intense pressure from these high dollar special interests.

It could only help to show public support for our democratic processes that include public participation for the Forest Service planning.  This time our Forest Supervisor has courageously done the right thing –so far.  Please let him know we support his direction.