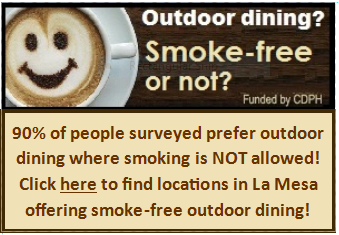 Pastor Dani Womack is the Community Life Pastor at Crosspointe Life Church and Chairperson of the La Mesa Collaborative.

July 11, 2016 (La Mesa)--Summer is finally here and what better place to enjoy being outdoors than San Diego County! La Mesa has invested millions to renovate their Downtown Village, putting a priority on outdoor seating in public spaces and local restaurants have joined in by growing their outdoor dining patios. Many cities throughout San Diego County and the state have passed local laws restricting smoking in outdoor areas such as parks, beaches, farmer’s markets, and outdoor dining patios.

A 2008 survey 1 of California voters found strong support for restricting smoking in outdoor areas. In fact, 97% believe that secondhand smoke (SHS) is harmful to those who inhale it, including to those who inhale it in outdoor areas (88%). In addition, 60% reported that they have been bothered by SHS exposure in outdoor dining areas in the past year. A 2015 survey 2 of 130 La Mesa residents and frequent visitors indicates that 72% have been bothered by SHS while dining outdoors.

The US Surgeon General has repeatedly stated that there is no safe level of exposure to secondhand smoke3. In fact, SHS causes numerous health problems in infants and children, including severe asthma attacks, respiratory infections, ear infections, and sudden infant death syndrome (SIDS). And some of the health conditions caused by secondhand smoke among non-smoking adults include stroke, heart disease, and lung cancer. In San Diego County, smoking is attributable to 33% of adult deaths (35 years and older) and secondhand smoke contributes another 7% to mortality rates according to the County’s Epidemiology and Health Statics Data Unit (for 2013, the latest for which there is data).

You might wonder if restricting outdoor smoking places an undue economic burden on businesses. Zagat (the famous restaurant review guide) conducted a survey of America’s Top Restaurants. According to their survey, “The verdict on smoking is overwhelming with 77% of diners saying they’d eat out less is smoking were permitted in local restaurants, and only 2% saying they’d dine out more” (2008). Smoke-free outdoor dining is not only greatly valued by patrons but it also reduces the economic burden associated with staff costs by reducing sick time due to exposure in the workplace.

Half of all the cities in San Diego County have taken steps to protect their residents from the dangers of SHS by passing ordinances that restrict smoking in outdoor areas where people congregate. Currently, only 27% of outdoor dining areas in La Mesa are smoke-free. Is your favorite restaurant among them? Why not join the growing movement to make outdoor dining in La Mesa smoke-free!

Learn more by contacting Lorenzo Higley at 619.442.2727 x6 or lorenzo.higley@eccasa.org