By Diane Conklin
Speak out at Thursday’s CPUC hearing on SDG&E scheme to make you pay for wildfires that it caused
April 4, 2012 (San Diego) -- As you are probably by now aware, SDG&E is trying to get the California Public Utilities Commission (CPUC) to make you pay for their future uninsured wildfire costs for fires they start, and including the past 2007 fires:  Witch, Guejito and Rice.  For those fires they want $594 million from their customer’s collective pocket, which works out to about $350 a meter.
What makes this Wildfire Expense Balancing Account (WEBA) scheme so egregious is that SDG&E says they have an insurance problem since those catastrophic fires five years ago, but what insurance problem did they have in 2006 or early 2007 before the fires?  Obviously, their own problem; they didn’t buy enough insurance.
So now, who do they think should pay?  Their shareholders?  Management?  Parent corporation Sempra Energy?  No, of course not.  The look to you to pay them for the mistake they made in the past in addition to the mistakes they undoubtedly will make in the future.
Because if they get this application (which Southern California Edison and Pacific Gas & Electric dropped out of) they will get a blank check for billions to make you cough up your hard earned dollars when they start future fires.  Just how that will help them become a safer utility eludes me.  If they are unsafe at any speed now, what will it be like when they don’t have to pay because you will have to pay?
Instead, there will be the ever present temptation to move those safety and maintenance dollars somewhere else, namely into profits.  Why?  Because SDG&E top brass don’t stay there forever; they move on to greener fields and how much greener would their prospects be if Wall Street sees they are a winner – not safe but not sorry either.
In fact, SDG&E has told Wall Street that it will collect the money from us for the past fires.  Sempra’s last quarter 10K filing with the U.S. Securities and Exchange Commission states: “It [SDG&E}expects that substantially all reasonably incurred costs of resolving 2007 wildfire claims that exceed its liability insurance coverage and any amounts recovered from other potentially responsible parties will be recovered from utility customers. At December 31, 2011, SDG&E’s Consolidated Balance Sheet includes a regulatory asset of $594 million associated with these costs.” 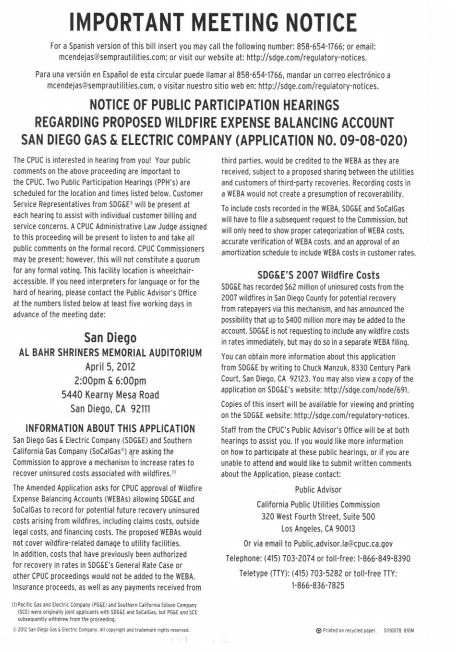 So what can you do about this?  You can attend the Public Participation Hearing this coming Thursday, 2. p.m. or 6 p.m., 5440 Kearney Mesa Road in San Diego at the Al Bahr Shriners Memorial Auditorium and give the CPUC a piece of your mind.  The Alliance fought hard for this meeting and this is one case where we think your presence will certainly make a difference.  Why?  Because the CPUC only very reluctantly scheduled this hearing at the last minute, which SDG&E opposed. What are they afraid of?  Look in the mirror.
I think the CPUC is very wary of this application and even more concerned with the explosive implications on you, the ratepayer.  If you show up and confirm their fears, this will be good for you and not so good for SDG&E.  What better way to spend your time than to participate to save you and yours from having to pay hundreds now and thousands in the future on their fires?   It’s your investment in the future that really can become the crucial tipping point that makes this very bad idea go away.
See you there!

Diane Conklin, Spokesperson, Mussey Grade Road Alliance, has been an intervenor at the CPUC for six years on power line fire issues.  She fought the Sunrise Powerlink for five years and this is her fourth CPUC proceeding.  The Alliance opposes SDG&E’s application. The views in this editorial reflect the views of its author and do not necessarily reflect the views of East County Magazine. To submit an editorial for consideration, contact editor@eastcountymagazine.org.