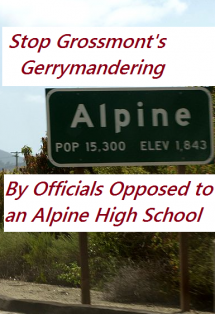 March 19, 2016 (Alpine) – Grossmont Union High School District Trustees are in the process of gerrymandering its voter district. Grossmont intends to move from a process of electing trustees on an “at large” basis to a re-districting to a by-trustee basis.  This means that individual communities such as that across Alpine, Blossom Valley, Harbison Canyon – for example – could elect their own chosen representative on the Grossmont board.  Grossmont is being forced into re-districting by threat of separate law suits.

Fundamentally, it is a sound idea.  However, Grossmont also decided to do this without voter input or approval.  The scheme of re-districting that Grossmont has selected is gerrymandering and results in:

2.     The redistricting results in Trustee Priscilla Schreiber getting tossed off of the Grossmont board.  Ms. Schreiber is the only trustee that has consistently, with honor and moral clarity, supported an Alpine high school.

3.     Grossmont Trustee Jim Kelly assumes the new role as Trustee over Alpine and surrounds!  Mr. Kelly is the driving force on the Grossmont board in a campaign to further deny an Alpine high school.  So far, that campaign has resulted in Grossmont spending $3 million in bond funds fighting Alpine in court; $3 million that voters approved for improved facilities across the district (plus an Alpine high school).

The county Board of Education (BOE) must rule on Grossmont’s redistricting proposal.  To that end, the county BOE will host a community forum in Alpine on the proposal.  The time, place, and etc. for the Alpine forum is as follows:

Please help seize this opportunity for a large public outcry against gerrymandering by Grossmont!  Just as you did twice before at county BOE hearings on the unification process, please turn-out to the forum, sign the paperwork indicating your opinion, and speak to the BOE if you wish (speaking is good).

Please consider sending this information to all your friends.

George Barnett is a prominent Alpine resident who is a director of the Alpine Education Association and an elected member of the Alpine Community Planning Group. The opinions expressed in this editorial reflect the views of the author and do not necessarily reflect the views of any organization or East County Magazine. To submit an editorial for consideration, please contact editor@eastcountymagazine.org.