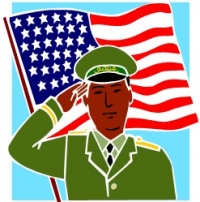 October 11, 2012 (San Diego’s East County)--As a vet I’m ticked. This great nation has vowed, rightfully so, to never again treat its veterans the way we were treated during the Vietnam Era. But now it seems that if a special interest group wants anything from government or the electorate they simply attach the “veteran” label to the request, whether it is a significant part of the program or not. As vets, we have gone from being abused to used. Better, but still not good.

A case in point is the current request by the Grossmont-Cuyamaca Community College District for the voters to approve a $398 million bond measure on the November ballot. Front and center of the ballot language and press releases is the mantra of “veterans’ centers to assist former and active-duty military.”

The district asked for and received the letter designation of V, as in veteran, from the Registrar of Voters. The placards and buttons are designed with a red, white and blue “V”, used to invoke the image of a service ribbon. Just to make sure the message gets across, blue stars bracket the “V”. And, to hammer home the message, community college leaders this week held a press conference on the Midway. Nice touch.

The message is clear, not to vote for this bond measure would be an affront to all veterans and unpatriotic to boot.

What is behind Oz’s curtain? What does the veteran get from Prop V? When queried for specifics, the college district honestly states that it has not really decided. In fact, it is only a concept. It will be better defined in the update of their master plan, which will occur after the election.

They will tell you it is not a separate building for vets to be financed with bond funds. Most likely a couple rooms within some building. Please understand that GCCCD already has veterans’ programs and space for the men and women who served to gather. This will only be a relocation or expansion of the current facilities. Cost, less than one-half of one percent of the bond money!

Let’s hope the voters don’t approve tax measures based solely on the assumed benefits to those having served in the military. Otherwise, the veterans get a couple of new flat screen TVs and the tax payers get stuck with a $398 million bill.

Rick Alexander served as an Army Officer at Supreme Headquarters Allied Powers Europe during the Vietnam War. He was a trustee for the Grossmont-Cuyamaca Community College District for 20 years. He is currently an investment specialist with KW Commercial real estate. The opinions in this editorial reflect the views of the author and do not necessarily reflect the views of East County Magazine. To submit an editorial for consideration, contact editor@eastcountymagazine.org.