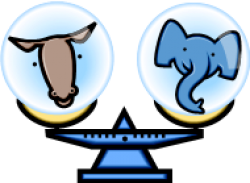 February 28, 2014 (San Diego)--I was proud to support David Alvarez and his campaign for Mayor. His life is an inspiration and his future is the future of San Diego. But now it is time for all San Diego Democrats to come together, and grow beyond our basic base of supporters. There are floods of Independents and Republicans out there disgusted with the modern Tea Party-dominated GOP. The new Confederacy has taken hold of the Republican Party, leaving millions of Americans ready to join with the Democrats in reasonable dialogue and solutions to our nation's future problems.

But in the next few months, San Diego Democrats must start to consider how the negative campaign against Nathan Fletcher by Alvarez supporters - both officially, unofficially, and by rumor, innuendo, and deception - created a bitterness that caused many Fletcher Democrats (much less Independents who did not want to vote for Faulconer) to either sit at home or vote for Faulconer in protest. I became an enthusiastic Alvarez backer, but it was very disheartening during the primary to be called a "DINO" (Democrat In Name Only) or worse because I thought Fletcher the better candidate to keep the Mayor's office in Democratic Party control.

Now we are hearing a theme from backers of Alvarez as to why he lost: Racism and/or the notion Democrats can't win Special Elections. It is true that racism and bigotry are spreading within the ranks of Conservatism. Simply listen to or read the comments of listeners on Roger Hedgecock's radio program, "FOX News", Rush Limbaugh or the "Duck-Dynasty show" and you can see and smell the racist, bigoted bile of so many who cling to the Confederate values defeated by Abraham Lincoln, Cesar Chavez, Martin Luther King and Barack Obama. Racism against Alvarez absolutely occurred ...  but no more so then against President Obama, who managed to win a far larger percentage of San Diego votes in 2012 then Faulconer did in 2014. In fact it is this same bigotry in all its forms: against Blacks, Latinos, Asians, Gays, Women and the Poor - which is driving so many Republicans from the GOP ... Republicans like Nathan Fletcher.

The latter argument is perhaps the most disturbing - the one that says there was never any chance for Alvarez or any Democrat to win, because Republicans vote more often in "Special elections." Ridiculous comments have streamed across social media and online publications, ranging from the absurd notion that the race was lost the moment Bob Filner resigned, to voters were hoodwinked into voting for Faulconer, to the apparent idea that Democrats simply don't care to vote when an election is not about the Presidency. This is a defeatist attitude for numerous reasons, least of all the ability it has to mask what was a clear distinction of this campaign: Democrats lost sight of the bigger picture.

The San Diego Democratic Party had the unique and maybe once in a lifetime chance to broaden the Democratic base and kill the GOP-development cabal of Doug Manchester and his lackeys. If Faulconer had not won, the Republican Party would not have had a single major elected official in California. Furthermore, there would not be a single Republican Mayor of any of the ten most populace cities in the United States.  But the way the Labor Council threw Nathan Fletcher under the bus in the name of party purity was terrible. They didn't just endorse Alvarez, but skewered Fletcher - basically implying that he was some sort of spy for the right and if you did not vote for Alvarez, you were violating the principles of Liberalism and the Democratic tradition. Essentially doing the work Faulconer wanted done.

So now, Democrats have no leverage or voice in city hall and the establishment powers that have dominated local governance are emboldened. They think they have a mandate. But within this defeat exists rays of hope for the future. Kevin Faulconer proved that Conservatism is dying. He barely, if ever, mentioned his party affiliation and or that he is a staunch conservative on economic issues. David Alvarez proved that Liberalism still has a way to go before being the majority, but the passion his supporters showed that Labor and the Liberal wing of the Democratic Party are determined fighters who will never quit. And Nathan Fletcher proved that there are millions of voters in between the two ideological ends looking for a home and leaning towards the Democrats if only we will welcome them into our party.

Ideological rigidity is not the way of America. Our values are inclusiveness and our principles are based on education, debate and seeking common ground. These are the true values and principles of the Democratic Party - the party of FDR through Barack Obama - and it is the party I am proud to call my own.

Hi Miriam, I guess my question wasn't about this particular writer's opinion, but why a lengthy opinion about a topic not directly relevant to East County was published. The opinions stated all reflect his or her view on the San Diego mayoral election. There are references in every paragraph to Alvarez, San Diego, city hall. I read this website because it's *EastCounty*Magazine, not San Diego. I would opine let's keep readers' editorials focused on East County topics.
Our primary focus is and always will be on East County. However, as a regional news source we do also have some limited coverage of broader regional issues. The choice of San Diego mayor does impact East County. For instance Todd Gloria ordered the draining of Lake Morena, a city-owned reservoir in East County. What San Diego does with regard to fire, water, energy etc. can all impact the entire region. San Diego's Council voted against the Quail Brush power plant at Mission Trails, for instance, a resource many in East County care about and use. The Mayor of San Diego controls around 40% of the votes on SANDAG, too, thus has a big influence on countywide policies. It would have been better if the editorial writer had expounded on some of these details but he didn't. Also our mission statement is to cover inland areas east of I-15 and that actually does include some portions of the city of San Diego, for instance the SDSU college area, Del Cerro, etc -- all these areas have voters in the SD Mayoral election. Similarly we cover countywide and even state and national political races since voters out here vote in those, and those decisions may impact people locally. Rest assured however that our primary focus is and always will be on East County -- if we have limited coverage beyond East County it's a supplement to our East County coverage, never a replacement for it because we know that you can't get coverage of most East County issues or happenings anywhere else anymore.
Why is this in the East County Magazine? What does the content of this reader's opinion have on the effect of East County directly? I don't think it's a reach to assume this reader is a Democrat, and if I was a Democrat, I wouldn't want this person speaking for me.
If you have a different view feel free to submit it and we will be happy consider yours for publication, too. Over the years we've published readers' editorials from major and minor political parties (Republican, Democratic, Libertarian, Green etc), for party-endorsed candidates and for primary challengers not endorsed by candidates. We believe having a mix of views is healthy for democracy. It happens this was the only editorial reflecting on the outcome of the mayor's race that was submitted to us, incidentally.
The author has a real problem with people who do not think like him. He obviously wants one world where the population marches in lockstep behind the glorious leader. Time to get off the racism train. I can take the piece and substitute Dem for GOP, msnbc and cnn for fox, and change the names to GOP or Libertarian or Tea Party candidates and write the same thing. I always find it amusing for anybody to endorse cesar chavez a known racist and violent opponent of illegal aliens working in the USA or green cards for that matter. Forget the statutory rapes and other crimes committed by him, just feed the lie. Mr Barrera its time to throw away the insults, the smears, the anger and remember EVERBODY has a right to an opinion and we don't have to agree, we do have to get along. That is what tolerance is, getting along, not bending to your view of the world.