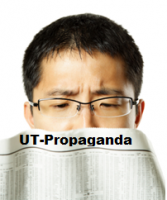 This wasn’t always the case. During the early years of the Republic newspapers were clearly partisan; but during the early years of the Republic most cities had several papers. For instance, Michael Schudson’s book, “Discovering the News: A Social History of American Newspapers,” (Basic Books, 1981) as described by Amazon.com: “This instructive and entertaining social history of American newspapers shows that the very idea of impartial, objective “news” was the social product of the democratization of political, economic, and social life in the nineteenth century. Professor Schudson analyzes the shifts in reportorial style over the years and explains why the belief among journalists and readers alike that newspapers must be objective still lives on.”

The Wall Street Journal is a prime example, winning awards for journalistic excellence all the while having an editorial section clearly one-sided. Politicizing the front page of the U-T was a first even for them. I was reminded of this in a recent story by Craig Gustafson published in the U-T, “Filner Tries to Make U-T an Issue in Campaign (October 15).” I sent by e-mail a letter to the U-T, which they published on October 16. However, they cut out several of the key points I tried to make. Below is my entire letter. I’ve bolded and italicized the parts published in the U-T. In the past, I’ve done word counts of letters published by the U-T and mine was certainly within acceptable limits:

Though a native San Diegan, I have lived in six other American cities. In addition, I’ve read about the history of the press, especially related to keeping separate the newsroom from the editorial board. Without such separation the news reports lose all credibility. As Craig Gustafson wrote: 'The U-T took the unusual step of touting its endorsement of DeMaio in the June primary with two front-page editorials.' The U-T has always been a conservative newspaper; but, in the past, occasionally published OpEds from liberal columnists and others. Since the take-over by Manchester, the Editorial page has been decidedly one-sided. However, in June they crossed the line. Never in my life have I seen editorials supporting one candidate put on the front page. Gustafson’s article compares monies given to the campaign by Manchester and those by unions; but fails to give an estimate of what two front-page editorials would have cost if sold on the open market. As Gustafson wrote: 'Newspaper publishers have long tried to steer civic debates in one direction or another.'  And that is their right; but when they blazenly put one-sided editorials on the front page, claiming as Gustafson does that 'the U-T newsroom is independent from the editorial board,' they have crossed the line. No longer is it clear where the news ends and editorials/one-sided opinion pieces begin."

Though Gustafson’s story was slanted; it did give both sides. However, one of the key points made by Gustafson was a comparison of monies given to the campaign by Manchester, owner of the U-T, and unions. As my letter points out, not counting the market value of putting op-eds on the front page grossly underestimates Manchester’s monetary contributions to the campaign. In addition, how much value should one put on having the region’s only major newspaper devote its editorial page, under Manchester’s direction, to supporting one side? Leaving out the historical perspective I gave as well as my personal experiences with newspapers both in San Diego and six other American cities weakened my arguments.

As I wrote, the U-T has always been a Republican newspaper; but in the past had columnist such as James Goldsborough and Lionel van Deerlin to represent more liberal perspectives; but this is no longer the case. The U-T now stands alone as the only American newspaper I know of that doesn’t even attempt to give the appearance of a separation between their news and editorial departments. While they have every right to maintain a blatantly one-sided editorial department, the people of San Diego should demand that they really do keep their news department separate and that includes the pages devoted to news!

Anyone who agrees with me should send a letter, e-mail, or phone the U-T and tell them that they should make a pledge that in the future they will keep their editorials where they belong and stop crossing the line.