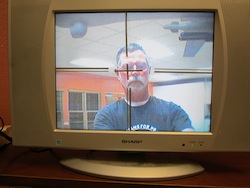 July 26, 2013 (Ramona) – Beginning in 2012 the stories about the misuse of drone technology have been frightening.  Starting with the revelation that we have been killing hundreds of civilians and children in places that we are not at war, to the government using the border drones to surveil American citizens.  Worse yet, there appears to be an unholy alliance between our nation and Pakistan because there is now evidence that our drones are killing people that are not terrorists, but instead political enemies of the Pakistani regime.

Toward that end, we at the San Diego Veterans For Peace are calling for an immediate end to drone attacks and domestic surveillance until the President of the United States provides to Congress and the American people full transparency regarding drone policy. He must provide to Congress and the American people the heretofore secret legal opinions that are allegedly used as a basis for justifying: (1) the targeting of US citizens without charging those citizens with a crime or crimes; (2) the targeting of foreign nationals who do not pose an immediate and imminent threat to the United States and; (3) the launching of drone attacks against the citizens of countries or those residing in countries, in which the United States is not in engaged in legal armed conflict. Further, we call upon Congress to pass legislation that provides for robust congressional and judicial oversight of foreign and domestic drone use, and the oversight of funding for drones within or outside the borders of the United States.

On the domestic front we see signs of widespread deployment of drones within US airspace in the near future. The FAA has been mandated to open the skies to drones in the next year, raising concerns of cost, airline safety, and the erosion of constitutional rights at home, which would profoundly change the character of public life in the United States.  The latest Senate bill on Immigration adds 18 Drones to both borders, a $500M windfall for General Atomics in Poway.   Cost projections show $10 billion in drone sales in the next decade, largely to domestic law enforcement. With state and local governments facing serious fiscal challenges, it is likely the federal government will provide this technology through Homeland Security grants.  This will increase the federal deficit and draw money away from essential government programs and services, which could otherwise be used to benefit the American people.

As members of Veterans for Peace we call upon the President, members of Congress, and all state and local governments to provide to the American people the necessary transparency regarding the use of drones both at home and abroad.  We also demand that laws be enacted to provide oversight of the use of this technology.  However, we cannot do this alone.

Thus we Veterans call upon all our citizenry to contact our politicians and demand that they fix this problem.  If they won’t we must work tirelessly to unseat them in the next elections.  America’s good and free people depend on it.

Dave Patterson is a Ramona resident and a  member of the San Diego Veterans For Peace.  www.sdvfp.org. The opinions in this editorial reflect the views of the author and do not necessarily reflect the views of East County Magazine.  To submit an editorial for consideration, contact editor@eastcountymagazine.org.