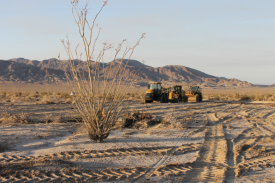 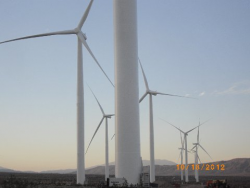 Editor's note: We received this editorial  from a Canadian reader in response to our coverage of the Ocotillo Wind Energy Project's impacts on our local desert and the people of Octoillo.

We grieve for you and yours, for the desert, the world and for the future.  The wind war stories are fundamentally the same from everywhere, the disillusionment pervasive.

How could corruption of such magnitude flourish under the UN? We forgot that, "The price of freedom is eternal vigilance"

We fight on against an old evil and know it only slept. Your Thomas Jefferson said..."you may have to fight when there is no hope of victory, because it is better to perish than to live as slaves."

In Canada we have a line in a post-WWI poem which exhorts people not to "break faith " with those who have died and it seems to me that the injustice in this wind war is so extreme the same resolve is called for, we will never surrender.

The very wind power that you Eco-activists, the "Self Proclaimed Saviors of the World" are now swearing at is the same wind power you all exalted as the "Wave of the future" some 25 years ago. Down with "Nuclear Power" We  can Power the World with Nothing but GREEN Power from the WIND and Solar energy from the Sun, You proclaimed. Well...You got what you asked for...now stew in it and quit your bitching. The Only reason the townies in Octitia are bitching is because they didn't get their pockets lined with Gold! The reason they got left out of the money they thought they should have is because they got greedy. So greedy in fact that the companies working the wind generator project got so fed up with them that they cut them off. They wouldn't even let their people go into the restaurants much to the chagrin of the locals. Could of made a bundle on burgers Eh...Between the "Profound Revelations of the Eco-Activists and the Greed of the locals you couldn't have made a worse mess of it if you tried...

The people didn't lie to Congress the wind industry did. They lied to the entire world about their turbines............The wind industry claimed the primary reason for eagle turbine mortality was because of their lattice towers.  They claimed that the industry's advanced wind turbines could supply all the electricity in the United States. Then so there wouldn't be any environmental opposition to wind, they rigged their studies.      Read below..................

This statement below was made to Congress in 1997.

ENERGY AND WATER DEVELOPMENT APPROPRIATIONS FOR 1998

Mr. HOFFMAN. "The fact of the matter is that birds get killed when they roost on the towers that support the wind machines, and their vision is so acute that they see their prey and don't see the rotating blades which are moving very fast, and so they take off after prey and fly through the blades without even realizing the blades are there. So the real problem is, how do you keep the birds from roosting on that wind support structure before they ever go off after their prey? And we're learning that there are certain sounds, there are certain colors, and there are certain kinds of support structures that don't allow birds to roost.

For example, if you look at some of the older wind machines, they're on flat structures. The birds like to roost on those horizontal struts. If you put in a cylindrical support tower, they don't do it, and you can really reduce the number of birds that are killed.

Part of the problem also is the kind of birds you're killing in California are golden eagles, and if you kill one eagle in this country, it's a serious problem. We're trying to reduce that mortality rate, so there won't be an environmental or any other opposition to wind, which is a very important energy resource for this country. We can open up the wind resource in this country with the advanced wind turbines we're developing and basically supply all the electricity in the United States, if you tapped all the potential that was there".