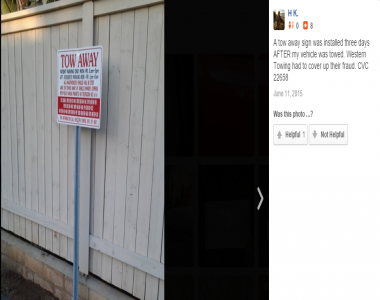 Photo Credits:  H.K. and Chloe N. on Yelp
By Liz Alper
February 23, 2016 (San Diego's East County) - A great day of shopping with my mother turned into a nightmare.
My mother brought me back to my apartment after our day together on Friday and parked in a fuel-efficient vehicle space.  She has always parked there with no issue.  She came into my apartment and within 45 minutes, the car was gone.  We called the police and they informed us that the car had been towed.  As if the fact that we weren't informed that the car was towed--making us believe it was stolen--was bad enough, thepolice had to tell us where the car was.
In comes Western Towing Company.  We called them and were informed that we would be notified when my mother could go pick up her vehicle.  This was at 9:45 p.m. on a Friday night.  My father had to drive down from Ramona (30 minutes). 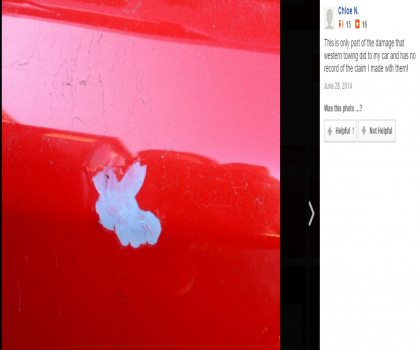 Around 10:30 p.m., we called Western again and were informed that the whole ordeal would cost my parents $352.00 and that there was only one Western representative who travels around San Diego County to relinquish people's vehicles.  Not to mention that we were not told what lot it would be at, only that it "could be" at La Mesa.  At 11:30 p.m., the call finally came.  My parents did not get home until 12:30.
I decided that this can't be right.  I decided to do a little research.  After going on Yelp, I was shocked at some of the reviews people were leaving.  "Western Towing (aka Sunbelt) removed my vehicle from a San Diego lot without posted signs at the entry or at parking spaces. They also damaged my vehicle in the process," writes Yelp user H.K.
That's not all; these spaces where there are no signs or placards saying that your vehicle will be towed have "Tow Away" signs magically appear three days later.  California Vehicle Code 22658 states that a parking lot must have signs posted at every entrance if a tow company is going to remove a vehicle.  Dents, scratched paint and damaged car parts have been found.  Long lines.  Expensive charges.  Unauthorized towing.  The list goes on and on.
"Western towing towed my car from my place of residence because a neighbor said I was parked in their spot. We don't have assigned parking. This was totally illegal! They were rude on the phone and even worse when I went to pick up my car," writes Sasha R.
To make matters worse, Western is not Better Business Bureau-certified.  Take that with a grain of salt.  It looks like they're thieves, too, according to one Yelp user who says they stole cash from her glove compartment.
If I could post a few choice words from my mother's rant on Friday night, I would, but I'll just say this:  Western Towing needs to be held accountable for their actions.  People shouldn't be being charged $352.00 for a measly tow job.
The opinions in this editorial reflect the views of the author and do not necessarily reflect the views of East County Magazine. To submit an editorial for consideration, contact editor@eastcountymagazine.org .

I have had the pleasure of being towed by Western towing. I had a permit to park. I never received any notice to move my car. Nothing on the property said I couldn't park there. My car was stolen at 2 am. When I found out, the cost was $290.00. I couldn't afford it. The person who called it in made a mistake. But declined to help me. Sorry was what she said. I lost my insured and registered car. That had a permit sticker. For nothing.
I think you parked anywhere that you should not had parked. I am working in taxi service in kochi, it is an online service company. The company provides cab service from kochi to other destination. The cabbies are continually being shut to open in all circumstances. Furthermore the best parts of open are relying upon the Kerala taxi administrations for their salary. So the cab drivers can show improvement over the Police individuals. That implies the administration can permit the cab drivers to handle the crisis cases like mischances, battles of open or any crisis circumstance at the beginning stage. The Kerala cabbie can reach soon than police then they have to advise to police for the further method. This will offer us to maintain a strategic distance from for a police some assistance with tilling getting an administration from them. The Kerala government is giving little space to the Kerala taxi implies which will help people in general to compose new history. This sort of new trial ideally will give more reaction from the Kochi airport taxi to get more trust over this service. Kochi is a renowned area in Kerala as far as its developing. This is about how we can use the cabbies for all crisis circumstance of society. These people groups are truly being shut by general society. So they can impart superior to anything anyone. Kerala taxi gathering is the best way to make this field solid and secure. The best possible direction for all exercises of Kerala taxi can ensure more advantage in this area.
Long time lurker but this made me create an account. First off Western Towing are a bunch of crooks. We had our car towed the first day we moved to San Diego in our new apartments. The apartment complex forgot to give us a parking sticker, so off our car went. It ended up costing us nothing to recover as the apartments at the bill, but it was a holiday weekend and getting our car back was a nightmare. This was not Western's fault, this was the apartments failing to give us the sticker. Same to be said for you. You parked someplace that you should not had parked. You can say you have parked there before "without issue", but I also speed from time to time without issue either. You parked someplace not meant for you and got towed, accept the responsibility of your actions and stop trying to shift blame. As for the yelp reviews, its yelp....
of the complaining party who authorizes and orders the towing, in this case apparently the apartment house manager/owner. It is this party who must be held responsible.