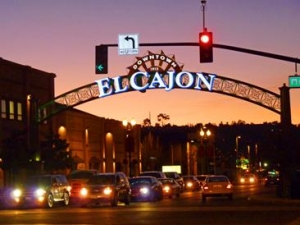 Update Nov. 8, 2014 -- Prior to publishing this editorial we contacted Mayor Wells for comment. He did not respond at the time but today contacted us to state that he did not estimate the renovations at $5.5 million.  He clarified,  "The renovations will actually be closer to $2.5 Million. If we are to lease space to the Rock their costs would only be what is above and beyond what we would normally do for the renovations. The costs associated with running the theater have roughly been $600,000/year. The expected negotiation with the Rock could bring in approximately $250,000 per year."

October 27, 2014 (El Cajon) --   The October 7 interview with Bill Wells, Mayor of El Cajon, contained a real bombshell. He said that renovations to re-open the East County Performing Arts Center would cost $5.5 million, with the Rock Church paying "much" of the cost.

That  confirms the suspicions of those opposed to the proposed alliance with the Rock Church: the renovations will be dictated by the church, and the completed ECPAC will be suitable only for that organization, rendering the facility useless as a performing arts center. Taxpayers will wind up  paying millions of dollars to subsidize the church. (The proposed cost  is two to three millions of dollars more than previous estimates.)

Wells should be asked to itemize the renovations that add up to $5.5 million. There apparently was a meeting between  representatives of the City and the church; who attended the meeting, and why wasn't the public notified?

What has happened in our city is that  councilmembers who do not believe in separation of church and state decided (perhaps two years ago) to make a statement about those beliefs by turning  ECPAC over to the Rock Church. City Manager Douglas Williford at some point  became aware of that desire, and instead of objectively looking at all possible options, became a cheerleader for the church. He did not determine the cost to operate the facility, and neither he nor the Council can state that the rental fees proposed by the church (which would be locked in for five years)  will meet the cost of opening the facility. It is quite possible that the City would lose money every time

ECPAC is used by the church. The proposed five-year lease could be disastrous for the City's finances.

Editor’s note:  We contacted Mayor Wells and asked him to respond to the concerns raised by Mr. Clark and several days later, we have not received a response.