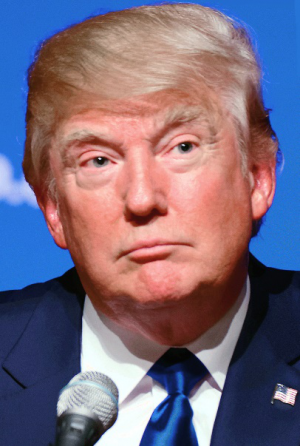 By Greg Dunne
Photo: Creative Commons by SA via Bing
December 11, 2020 (Alpine) --  Will Donald Trump run for re-election in 2020? He has so many “tremendous” reasons to run again in 2024. He needs to pardon himself, again, if this first pardon does not work. He needs to show the Country the 2020 election was rigged and that in 2024 he can beat Joe Biden in a “legitimate” election. He loves rallies and he can start them on January 21st, 2021, the day after the presidential inauguration. What is more, he does not have to burn any brain cells by coming up with a new campaign slogan, he will just use the same one “Make America Great Again” which was successful in his 2016 presidential campaign.
On the serious side, I think he will run because he has a competitive nature and he definitely does not like to lose. He will run again because he has got plenty of energy to do so (at 78 years of age in 2024 he will still be going strong). He will run again to avoid any financial troubles he would be facing if he is not running for a second term as President of the United Sates. He will run again because it is a fight to run for office and being of a competitive nature, he is good at a fight. He will run again because he will long to boast about “how nobody thought it could be done”; a lot like Muhammad Ali boasting about himself winning the heavy weight title again and again (but not nearly as well-spoken as Ali).

Obviously so many things can happen between now and 2024. Some of the questions are – will Biden’s health be an issue? Will another Republican emerge to give Trump a challenge? Will there be a viable third-party candidate, possibly pulling votes from one or both of the other parties? I know one thing in my lifetime of 60 years, I do not think that the 2024 election can surpass the craziness and unusual spectacle that 2016 and 2020 has displayed to the world. One last thing, a minor correction on my prediction that Trump starts his 2024 Presidential Rallies the day after the inauguration. Much more in keeping with the “Trump Like” persona we know, he will start his first rally on inauguration day.

Should Republicans stand with Trump in a 2024 election or try to go in a new direction? Although I think some and possibly many would like to go another direction than backing Donald Trump - they are politicians and will not want to lose any constituents so that they are guaranteed to be re-elected. As long as Trump has voters on his side very few in the Republican party will risk the consequence that they would alienate voters by not backing Trump. The Democrats would do the same thing. Term limits would do away with some of that mentality. This is also why people like George Will and others can distance themselves from Trump, they do not have to be re-elected. So, the answer is “no”, if they had half the backbone as Teddy Roosevelt did, they would not follow him.
The opinions in this editorial reflect the views of the author and do not necessarily reflect the views of East County Magazine. To submit a reader’s editorial for consideration, contact editor@eastcountymagazine.org.

You write: "He loves rallies and he can start them on January 21st, 2021, the day after the presidential inauguration."

Actually, given his history, there is a good possibility he will tweet calls for protests starting before or during the inauguration. And given the majority of Trump supporters neither wear masks nor practice physical distancing, there exists a distinct possibility that a huge surge in COVID-19 cases will occur, both among the protestors and friends and family who they subsequently infect. So, yep, Trump ignored the experts, admitted on tape to Bob Woodward that he knew COVID was a particularly nasty virus, refused to be a roll model by wearing masks, and didn't even use the 1950 Defense Production Act, so we still have shortages of Personal Protective Equipment, thus Trump bears responsiity for the vast majority of unnecessary deaths, so, why should he change now. Other nations, e.g., South Korea, Taiwan rapidly implemented testing, use of masks, and physical distancing and experienced very low death rates AND were able to allow schools and businesses to stay open. And, yet, Trump  supporters believe what he says, ignoring ALL the information that contradicts his claims.