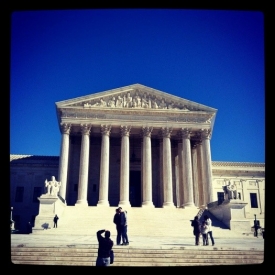 June 26, 2015 (San Diego)--According to a recent article in the San Diego Union-Tribune by Steven Greenhut, the U.S. Supreme Court will be hearing a Texas case, Evenwel v. Abbott, that could overturn 200 years of core American principles that apportioned representation in Congress by the “whole number of  persons” and not just those eligible or registered to vote. The result would be “taxation without representation.”

Greenhut’s article also mentions access to state programs, but immigrants contribute to our economy in many ways, including creating jobs (e.g., just think of Silicon Valley) and paying taxes. Why shouldn’t they and their children benefit from their contributions?

California legislators have over the years been softening the distinction between citizens and noncitizens . . . provid[ing] them with access to state programs. A U.S. Supreme Court case . . . could force state officials to make a firm distinction between citizens and noncitizens in divvying up electoral districts. This Texas voting-rights case, known as Evenwel v. Abbott, could shift power away from poorer, immigrant-heavy urban areas to wealthier and more Republican counties — and from Southern California to the San Francisco Bay Area. . . In 1964, the Supreme Court threw out a districting system that often gave cities with millions of people the same number of legislators as rural counties with only thousands of residents. It established the ‘one person, one vote’ principle, but never made it clear whether a ‘person’ meant a resident or a voting-age citizen. . . The 14th Amendment directed Congress to be apportioned based on the “number of persons,” but was mum on the issue of state legislative bodies, explains Stanford law professor Nathan Persily in Politico. This case deals with the latter — and most states have relied on census data, which also is based on residents rather than citizens. . . In this latest court matter, legislators who represent large noncitizen populations say the people in their districts already are here and eligible for many public services — and that an adverse court ruling would make it harder for legislators to serve residents. Certainly, California’s ongoing push to equalize citizens and noncitizens is facing its most serious challenge to date. (Steven Greenhut, COURT CASE PITS VOTING RIGHTS OF ‘CITIZENS’ AGAINST ‘RESIDENTS’, June 4, 2015, http://www.utsandiego.com/news/2015/jun/04/tp-court-case-pits-voting-rights-of-citizens/  )

The subject of Congressional apportionment is addressed twice in the U.S. Constitution:

Note that the 14th Amendment clearly distinguishes between representation and voting. Voting is limited to citizens and, at the time, only male citizens; but representation to the whole number of persons. When the Constitution was passed, women did not have the vote, children then and now still do not have the vote, and males could only vote if they owned property; yet, they were and are counted in the Census. Note also that taxes were to be apportioned by the Census count of persons, not just those eligible to vote.

The vast majority of immigrants pay taxes, both income taxes, FICA, and Medicare, and other taxes, e.g., sales taxes. Why shouldn’t their children, for instance, be eligible for public schools? A film from 2004, “A Day Without a Mexican," offered a satirical look at the consequence if all Mexicans in the State of California disappeared. A 2003 study by the Federal Reserve Bank of Dallas clearly found that immigrants contribute much more to our economy that most people realize, much more than they cost (Federal Reserve Bank of Dallas, U.S. Immigration and Economic Growth, Issue 6 November/December 2003, http://www.dallasfed.org/assets/documents/research/swe/2003/swe0306a.pdf ) Just one of several studies finding similar results. And often the children of immigrants are born in the U.S. and, thus, are citizens. A Court ruling in favor of the plaintiff could deny them representation.

Newspapers often emphasize the negative, if it “bleeds it leads," the individual cases of welfare fraud, of crime; but seldom tell the stories of the vast majority of immigrants who come to this country to work hard and make a better life. Not only do we all benefit economically from their contributions (e.g., imagine agriculture without them); but many contribute to science, technology, to culture, cuisine, music, art and many other areas that enrich our lives. And, even to my surprise, studies have found that immigrants commit fewer crimes than native born Americans. I leave it to the reader to go to the reports (Kristin F. Butcher and Anne Morrison Piehl, “Why are Immigrants’ Incarceration Rates So Low? Evidence on Selective Immigration, Deterrence, and Deportation," Federal Reserve Bank of Chicago, November 2005 [just type in title in Google]; David Leonhard, “Immigrants and Prison," The New York Times, May 30, 2007, http://www.nytimes.com/2007/05/30/business/30leonside.html ). So, shouldn’t they, contributing in so many ways to our society, including our economic productivity and taxes, be eligible for some of the programs they help fund?

At the time of the American Revolution, despite the hyperbole, England was the most democratic state in the world. “Taxation Without Representation” was the battle cry. Actually, colonials had been offered representation in Parliament; but they understood that a few representatives would not have much sway. They wanted independence to determine taxation and what to use it for. For a fascinating account of how England could have avoided the American Revolution at the time, though the distance, cultural, political, and economic differences would have eventually led to independence, possibly peacefully as Canada’s, see Don Cook, “The Long Fuse: How England Lost the American Colonies, 1760-1785," The Atlantic Monthly Press, 1995.

Two bedrock principles going back to Colonial times and the American Revolution are at stake in the current Supreme Court case:

Perhaps, even with the 14th Amendment, it is not crystal clear what is lawfully required of the States; but certainly, given the historical bedrock principles of our Founding Fathers, shouldn’t the States abide by these? Keep in mind that as far as I have been able to tell, just about every Western Industrialized Democracy apportions representation by the “whole number of persons” and not just those eligible to vote. A Supreme Court deciding in favor of the plaintiff would not only turn its back on bedrock American principles; but from principles underlying almost all other democracies.

Joel A. Harrison, PhD, MPH is a retired epidemiologist and native San Diegan. His family has been in San Diego since 1936. Dr. Harrison has been actively engaged in supporting the adoption of a single-payer-non-profit health care system, Medicare for All (see Physicians for a National Health Program’s website at: http://www.pnhp.org ) and is currently writing articles in support of vaccinations for Every Child By Two, an organization founded in 1991 by Rosalyn Carter (former President Jimmy Carter’s wife) and Betty Bumpers (wife of former Governor of Arkansas) to promote vaccinations in children. You can find Dr. Harrison’s articles at: http://www.ecbt.org/index.php/facts_and_issues/article/expert_commentary..