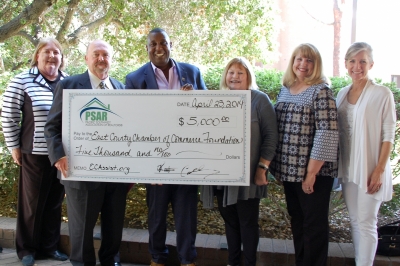 The El Cajon City Council at its April 23 meeting hosted a check presentation ceremony recognizing the PSAR grant to the East County Chamber of Commerce.

PSAR was honored for funding the creation of www.ECAssist.org, a one-stop online resource offering information on services based on either location or need. At the website, people looking for food resources can go to a column on the left and find links to pantries in various East County locations. Another click leads to phone numbers for various hotlines to medical care and shelters.

“I’m very proud of our Association’s efforts to assist in finding solutions to reduce homelessness,” said Robert Calloway, 2019 PSAR president. “This website is an excellent resource that will help the homeless and near homeless in the East County.”

“It’s very rewarding to be part of the Homeless Task Force,” said LeMenager. “Our group discovered that helpful information was not organized and accessible to our homeless population. That’s when the idea of a homeless resources website came together.” 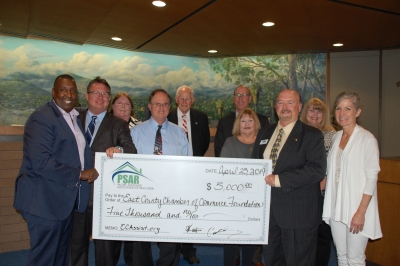 “Access to information and communications powered by technology is nearly universal in today’s world,” said Hollingworth. “The presentation at the El Cajon City Council meeting demonstrated how important organizations such as PSAR can make significant contributions to our community.”

The Task Force’s organizational structure has 10 “solution groups.” Officials said the Access to Services Solutions group and the Communications and Marketing Committee group worked together to create a website offering ways a homeless person could get help in the East County and provide a way for the public to contribute to those solutions.

Studies have confirmed that a majority of people experiencing homeless have cell phones providing access to the Internet. One study said that 70 percent of homeless patients visiting emergency departments had cell phones. Another study conducted by researchers Melody Kim, Melissa Cameron and Alex Fung found that 8 out of 11 homeless people in San Diego County had cell phones and the other two were seeking replacements.

It’s estimated that East County has more than 1,000 homeless residents, according to a 2018 study, called the Point In Time Count, conducted by the San Diego Regional Task Force on the Homeless, as required by the U.S. Department of Housing and Urban Development.

The $5,000 from the realtors group went to the East County Chamber Foundation, the Chamber’s 501(c)(3) nonprofit public benefit corporation. The presentation at the El Cajon City Council meeting was scheduled for the month of April in recognition of Fair Housing Month, as declared by the U.S. Department of Housing and Urban Development. In 2018, the Fair Housing Act celebrated its 50th anniversary. The act is designed to protect Americans from discrimination in the sale, rental and financing of housing based on color, race, national origin, religion, sex and disability.