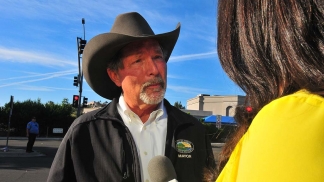 Chris Olps, leader of the recall drive, said Thursday night that “we are short by quite a margin with only 5,127 signatures,” where 6,651 verified signatures were needed by Thursday’s deadline.

He said petitions containing signatures wouldn’t be submitted due to “fears of retaliation or harassment by the mayor, council members or City of Poway.”
Olps, who would have run for mayor had the recall succeeded, told Times of San Diego that signatories asked his group to hold the petitions until “we had reached a number likely to be valid.”
He said keeping the names private “is part of the continuing effort to keep our promise of protecting our community members.”
On Friday, Vaus said via email: “The failure of the recall comes as no surprise given that it was a politically motivated stunt by a five-time losing city council candidate. As mayor, I focus on the issues that matter to residents. That’s what I’ve always done and will continue to do.”
The recall petition was approved by the the Poway City Clerk’s office Oct. 21. It accused Vaus, 69, of violating the state’s Political Reform Act by not filing certain paperwork. And it revived attacks on the Republican’s longtime Carols by Candlelight annual fundraising concerts.
“It has never been a registered charity with the California Attorney General’s Office as required by law,” the petition said. “He has also never disclosed it on any statement of economic interest during his time in office.”
Olps, leader of Powegians Supporting the Recall of Mayor Vaus, also accused Vaus of letting developers “line his campaign pockets.”
“Mayor Vaus has eroded the unique qualities that make Poway great,” the petition says. “From the abandoned Outpost hole, to 4-story buildings on Poway Road, he is erasing our country feel, and will leave us with nothing but an overdeveloped city.”
Vaus, a Grammy-award winning musician who raised his profile after the Chabad of Poway shootings, responded to the petition in October:
“This phony recall scheme is a political stunt by Chris Olps, a five-time losing City Council candidate. It could cost taxpayers (you!) close to $1 million for a special election right before the regular mayoral election. And it’s based on lies.”
As of Jan. 31, according to county records, Poway had nearly 33,000 registered voters (12,000 Republicans and 10,600 Democrats, along with 8,200 who declined to state). The 2020 census found a city population of 48,841.