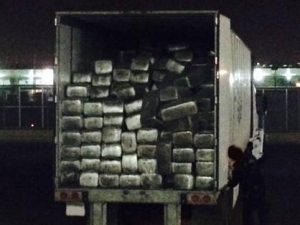 February 27, 2015 (Otay)--U.S. Customs and Border Protection officers at the Otay Mesa cargo port of entry Thursday seized more than 15 tons of marijuana hidden in a cargo shipment of mattresses.  The seizure is the largest narcotics seizure ever at the border crossing, and second largest seizure at any border crossing nationwide.

Otay Mesa Cargo Port Director Rosa Hernandez  said,“I am extremely proud of the work my officers do.  Officers never give up their enforcement posture and demonstrate each and every day that they remain guardians of our nation.”

At about 6 p.m. on Feb. 26, a driver arrived at the Otay Mesa crossing with a cargo shipment identified as “mattress and cushions.”  The CBP officer conducting the inspection referred the truck and shipment for an x-ray examination.

During the x-ray exam, CBP officers identified an anomaly and sent the truck and shipment to the dock for a more intensive examination.

In total, officers found 1,296 packages, containing about 31,598 pounds of marijuana with an estimated street value of approximately $18.96 million.

The weed is not a narcotic. Look up morphine or heroin. Correction required.
You are correct, and this was from the press release, sorry I missed it.
...I guess all the left wing, pot smoking, Hippies will be doing without their "medicine" for a while.
Sorry ThowBum, I doubt many "Hippies" are smoking this "dirt weed" for medicine, as one news caster called it. None of this was heading to any "medical shops", so no one needs to go without medicine. Go ahead crack open a beer ThowBum. Wake up and smell the weed, Legal in what, 4 states now? California wont be too far behind, and we wont need any mexican weed either.
in our county relies on a cooperative of people who grow their own and is planning to begin its own cultivation in a local warehouse. Interestingly I was there on a related story this week. They claim that about half their clientele are older people with serious medical issues. That includes a good friend of mine, who uses it to ease the pain he has from lymphoma cancer that is in his bloodstream and makes him hurt all over. He says nothing else eases his pain. Seems like a better option than narcotics that are available by prescription. An interesting point is that in Colorado, the first state to legalize even recreational pot, deaths from narcotics dropped sharply. Given the choice, apparently, many would prefer pot to Ocycontin or other strong and addictive narcotics.