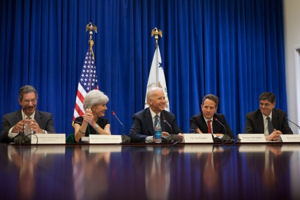 December 31, 2011 (Washington D.C). The U.S. Department of Justice has recovered more than $5.6 billion in fraud proceeds in 2011 – the largest amount for any single year in the history of the department.
This historic achievement represents an increase of more than 167 percent since 2008, and includes nearly $3.4 billion in civil fraud, as well as $2.2 billion in criminal fraud.
Deputy Attorney General James Cole made the announcement at a meeting with Vice President Biden at a Cabinet meeting in mid-December focused on meeting the President’s commitment to cut waste and fraud across the federal government.

These recoveries stemmed from activities ranging from grant fraud, to mortgage fraud, to procurement fraud, and far beyond.  In fact, nearly $3 billion was recovered in health care fraud alone, due in part to unprecedented levels of cooperation between the Department of Justice and the Department of Health and Human Services.
In particular, the use of Medicare Fraud Strike Forces – specialized teams of agents and prosecutors dedicated to a singular mission – has significantly expanded in recent years, and their impact on our efforts has been dramatic.  In 2008, these Strike Forces allowed the Department to bring cases involving $384 million in fraudulent claims.  This year, they brought cases involving over $1 billion in fraudulent claims – meaning that, for every dollar spent on this effort, the Administration has been able to recover seven dollars.
All told, the Department of Justice has amassed $15 billion in total fraud recoveries since 2009.  Some of this money has been sent back to states, paid to whistleblowers, or devoted to strengthening important programs like Medicare and Medicaid.  Other funds have been returned to the U.S. Treasury to help reduce the deficit.  And all of this is just the beginning.
Deputy Attorney General Cole said, “Our message could not be clearer – we will aggressively investigate and prosecute those who seek to defraud the American people. Those who commit fraud will be held to account. And the America taxpayer will continue to see a high rate of return on its investment in the Department of the Justice.” All across the country, the Department of Justice continues to move aggressively to protect the American people from fraud, he added.
For more information, visit WhiteHouse.gov, StopMedicareFraud.gov or StopFraud.gov.