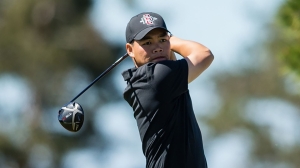 The Aztecs posted a combined 10-under 278 during the final round to capture their first event crown since winning the 2016 Saint Mary’s Invitational. The Scarlet and Black also registered the third-best 54-hole score in relation to par in program history. SDSU finished second at the 2017 Warrior Princeville Makai Invitational with a 47-under 817 and also landed in the runner-spot at the 2010 Alister MacKenzie Invitational with a 46-under 806.

In addition, SDSU’s score in relation to par (-40) was almost as a much as the next three teams combined, as Grand Canyon (-18) finished a distant second, while San Diego (-16) was third, followed by Utah State (-10).

Individually, Anupansuebsai also established a tournament standard with an 18-under 198 to capture his first collegiate victory. With his total, the Aztec junior also eclipsed the school record for lowest score in relation to par set by former SDSU All-American Xander Schauffele, who finished at 17-under to win the 2015 Barona Collegiate Cup.

Anupansuebsai shot a 3-under 69 on Tuesday, playing spot-free golf until making his lone bogey of the round at the par-3 17th. However, the 2019 All-Mountain West selection sank four more birdies to give him 21 for the week, which tied for the top spot in the field. Among his conversions was an impressive drain on the par-3, 179-yard No. 3, which ranked as the fourth-most difficult hole of the week.  He also had back-to-back drains on the 15th and 16th greens to all but secure the crown, with his closest pursuers Clay Feagler of Pepperdine, Leon D’Souza of USC and Trevor Lampson of Grand Canyon tying for second at 13-under 203.

Anupansuebsai’s triumph also gives the Aztecs a team and individual title for the first time since 2012, when Alex Kang and SDSU were victorious at the Barona Collegiate Cup.

Not to be outdone, the Aztecs received a boost this week from Leo Oyo (Tokyo, Japan), who climbed three places into a solo fifth at 10-under 216 after posting his second straight 68. The SDSU sophomore began his day inauspiciously with a triple bogey but immediately made up for it with an eagle on the par-5 second, which set the tone for the rest of his round. The 2019 U.S. Amateur competitor overcame two more bogeys with a team-high five birdies as well as another eagle on the par-5, 537-yard No. 15.

Christian Banke (Danville, Calif.) also displayed upward mobility, vaulting 12 places into a tie for 12th at 5-under 211 thanks to a final-round 69. The Aztec junior matched Oyo with two eagles of his own at No. 15 and No. 18 before closing with a birdie at the par-5, 526-yard No. 2.

Conversely, Newport Laparojkit (Montebello, Calif.) slipped three spots into a tie for 19th at 3-under 213 after logging a 72. The SDSU senior sank four birdies, including three on the front nine, but encountered difficulty with four bogeys after the turn, which hastened his drop. Still, Laparojkit managed his highest placement in three varsity starts for the Scarlet and Black.

Elsewhere, Callum Bruce (Banff, Scotland) also took a slight fall on the leaderboard, tumbling five places into a tie for 25th at 2-under 214 after matching Laparojkit with a 72. The junior transfer recorded a pair of bogeys on his first four holes but grabbed some momentum with a trio of birdies, including an impressive make on the par-3, 173-yard No. 13, which ranked as the sixth-toughest hole of the week. He also completed a drain on his finishing hole at the par-5 No. 2, but it wasn’t enough to overcome consecutive bogeys on the 16th and 17th greens.

Jin dropped three spots into a tie for sixth at 9-under 207 after firing a 72 on Tuesday. Despite 14 pars and back-to-back birdies at No. 7 and No. 8, the Rancho Bernardo High product lost ground thanks in part to consecutive bogeys on the first and second greens. Nevertheless, the SDSU junior was still able to complete his career-best total this the week and highest placement as a collegian.

Meanwhile, Abbracciemento finished the tournament in a tie for 38th at 2-over 218 on the heels of a 74. The Aztec senior birdied a pair of par-5s at No. 15 and No. 6, but had his progress stymied by four bogeys.

San Diego State wraps up its fall schedule early next month when it travels north to the Monterey Peninsula for the Saint Mary’s Invitational Nov. 4-6 at Poppy Hills Golf Course in Pebble Beach, California.