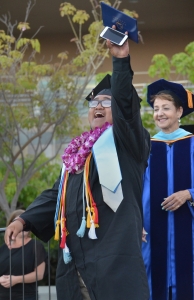 June 11, 2018 (El Cajon) - Commencement day is always a day of celebration and promising futures as students take part in a time-honored processional, while families and friends cheer and beam with pride.

This year’s graduation ceremonies at Cuyamaca and Grossmont colleges were ones for the record books as a highest-ever 2,500 graduates received more than 5,500 degrees and certificates on June 6 and 7. These numbers translate into a 23 percent increase in the number of graduates and a 20 percent hike in the number of degrees and certificates compared to 2017’s record-setting numbers. 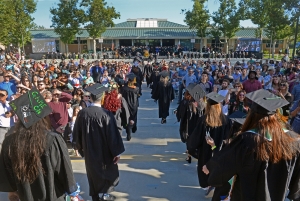 At Grossmont College’s 57th annual ceremony the following day, nearly 1,800 graduates were awarded more than 4,200 degrees and certificates, the most credentials granted among all the community colleges in the region, President Nabil Abu-Ghazaleh noted after welcoming the crowd in English, Spanish and Arabic. 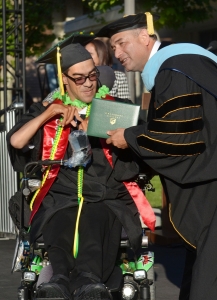 After congratulatory whoops to graduates at both colleges, Chancellor Cindy Miles expressed her gratitude to the members of the class of 2018 for trusting Grossmont and Cuyamaca with their education and for their perseverance.

“Thank you graduates, for sticking with it, overcoming obstacles in your way, and achieving your educational dreams,” she said.

Governing Board President Bill Garrett also congratulated graduates on a job well done and encouraged them to continue on a path of success in their future endeavors.

“Go forward and make us even prouder tomorrow than we are of you today,” he said.

Amid the pageantry and celebration of the milestone day were student speakers Joel Spencer (below right), who earned three certificates from the Cuyamaca College Water and Wastewater Technology Program, and Marycruz Villaseñor. who received  an associate degree in university studies and is preparing to transfer to a four-year university to study filmmaking and creative writing. 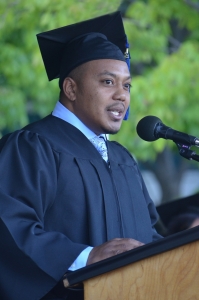 Spencer, 38, had been working with the sanitation division in San Diego when the city, reeling from the impacts of the Great Recession, sent him a layoff notice in 2010. He came to Cuyamaca that same year in search of a new career.

While he ended up keeping his job, the college’s Water and Wastewater Technology program opened new avenues for him, leading to his passing a state certification exam and an upcoming promotion as a San Diego water plant operator.

“I now have both the skills and the education, to not just begin my next job, but to actually embark on a lasting career,” he said. “I owe that to the wonderful program offered here at Cuyamaca College.”

Villaseñor, the second student selected to give the commencement speech, was born in Tecate, Mexico and her journey at Cuyamaca College included working as a mentor in the Pathway Academy, designed to help students build a clear and quicker route to their educational goals. She told fellow graduates to take pride in their accomplishments, but to also not forget those instrumental to their success. 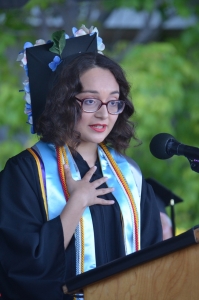 “We would not be here if not for the people that helped us along the way, so don’t forget them -- from the teachers that allowed us to stay a little bit past their office hours, to the great resources that Cuyamaca provided,” she said. “Isaac Newton said it best when he said, ‘If I have seen further than others, it is by standing upon the shoulders of giants.’”

Giant video screens were introduced at this year’s commencement that displayed graduates’ prerecorded thank-you messages to the college and a look at the year in review before the start of the ceremony, and video of speakers and students that was livestreamed once the ceremony got underway.

Among the first students in the processional was business major Ricky German, whose 16-year odyssey at Grossmont College as a cerebral palsy patient was a compelling story of resilience and joy. 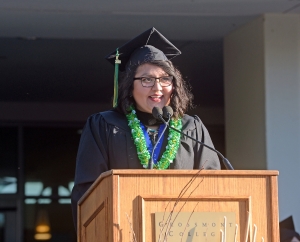 Giving the commencement speech was student Kenda Willie, an Administration of Justice graduate selected by a committee of peers and educators to give the customary address.  A Grossmont College student since 2013, Willie is a first-generation college student and will be transferring to San Diego State University in the fall to pursue her bachelor’s degrees in criminal justice and biology.

She has her sights set on becoming a forensic evidence technician and eventually getting a master’s in criminal justice and teaching credentials.

Willie spoke of the special challenges facing those who are the first in their families to pursue a college degree and credited the college and faculty for helping her discover her dreams and for providing the tools to help her in her successful drive forward.

“Compared to others, first generation students don’t have the luxury of having a predetermined path,” she said. “We are the trailblazers at the core of it all, pushing our way up the mountain so that others – like our younger siblings – can follow.

“Grossmont College has not only shown me what is possible, but that anything can be reached. It has helped develop me into the person I am today. No matter where I go -- now on the next step of my journey – I will always be a Grossmont Griffin.”