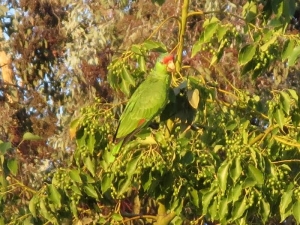 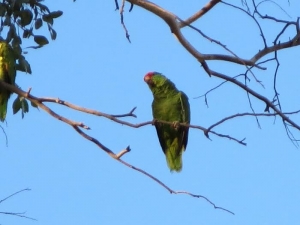 This bird inhabits urban areas as well as forests, and agricultural land. Very gregarious, the parrots stay together in groups as they fly around, feed, hang out in trees, and roost for the night.

These small sized (average 12 inches in length) green parrots, which sport a noticeable red crown of feathers capping their head, gather in large flocks, particularly at sunrise and sunset. Yellow beaks with blue, orange, black, and yellow feathers, accentuate the overall beauty of this amazing creature.

Their near constant chatter and screeching is very loud, almost deafening, the closer they are. Annoying to say the least. Many people simply cannot tolerate the excessive noise!

Food sources include; seeds, flowers, berries, nectar and fruit. Raucous, yet fascinating birds, they can be found in many areas, which include: parts of Southern California, Florida, Hawaii, even Texas, and of course Mexico & Veracruz.

Stories abound as to how they were introduced into areas beyond their native homeland. Some may be pets that got loose and began new families. One rumor is that some escaped or were let loose by exotic bird smugglers Perhaps the simplest reason is that some of them just began migrating on their own--exploring new areas, seeking food and nesting sites - then others followed.

Egg clutches average four per nest, and it takes about 28 days for the chicks to hatch and emerge into a new life. In about five years they are considered to be a mature adult, capable of reproduction.

Did you know that a flock of Parrots is actually called a “Pandemonium”? Makes sense to me, considering how loud they are when “talking”.

They seem to enjoy human interactions such as mimicking sounds and general camaraderie. Perhaps these are reasons they hang around populated urban areas.