New! View a video of the fire by Daren Sefcik, taken yesterday

Update 12:00 p.m.-- Cal Fire reports the Old Fire is now 907% and still 30% contained. "Firefighters are making good progress with the fire, however the winds have increased, which could cause problems," said Roxanne Provaznik at Cal Fire. The are continuing to patrol the fire and mop up hot spots."

June 18, 2012 (San Diego’s East County)- The Old Fire which began yesterday afternoon south of I-8 in the Campo area has consumed over 820 acres and is 30% contained, according to Cal-Fire sources. The fire is currently burning to the southeast in the Live Oak Springs area, moving east toward Boulevard.

“One residence and one outbuilding were destroyed and over 200 structures remain threatened; the Live Oak Springs Mobile Home Park,  and Community of Boulevard as well as the Sunrise Powerlink,” Roxanne Provaznik with Cal-Fire advised this morning.  Cal-Fire hopes for full containment tonight.

However a red flag alert has been issued by the National Weather Service beginning at noon today and extending into tomorrow. 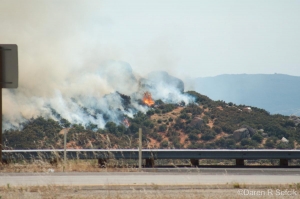 Strong gusty winds and low humidity’s are expected in the fire area. Residents across East County are advised to stay well hydrated and be vigilant due to potential for new fires or a sudden change in direction of the Old Fire.

Many of the firefighters responded from other fires that have been burning around the state. Cal-Fire currently has 62 engines, 19 fire crews, 7 bulldozers, 5 water tenders, 4 helicopters, 1 helitanker, and 4 airtankers (489 firefighters).

SDG&E reports that power has been restored to all but five customers in the fire area, with full restoration expected by 3 p.m. today.

It's gonna be a brutal summer! Please, no more Cedar Fires!