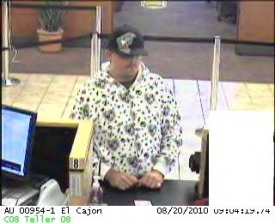 August 20, 2010 (El Cajon) – Police seek a bank robber who held up Wells Fargo Bank, 475 Fletcher Parkway, at 9:07 this morning. The thief got more than cash, tripping a red dye pack to explode. Police are seeking the suspect, a white man in his late 20s to early 30s with blond hair and a goatee. He wore a black-and-white camouflage sweatshirt, glasses, and a black baseball cap with white logo.

He was last seen fleeing on foot toward the north end of Parkway Plaza shopping mall.Officers were unable to locate the suspect and the investigation is continuing. There were no weapons seen and no reported injuries.