Propositions’ impact on plate at League of Women Voter’s luncheon 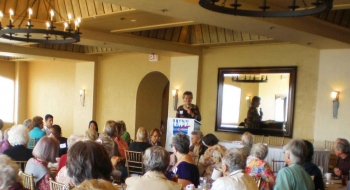 Story and photos by Emily Anderson

October 2, 2010 (San Diego) -- Members of the San Diego League of Women Voters met last Thursday, September 23 at Tom Ham’s Lighthouse on Harbor Island to hear a three-member panel discuss redistricting, including the potential impact of an upcoming ballot initiative that could overturn a major redistricting measure previously approved by voters.

Sail boats drifted lazily past as Elizabeth Maland, San Diego city clerk, Vladimir Kogan, a UCSD student and Kathay Feng, an author of Proposition 11 and executive director of California Common Cause, discussed redistricting both at the local and state level. Kogan and Feng did most of the talking, discussing their differing viewpoints about the California Citizen’s Redistricting Commission and how it affects gerrymandering. 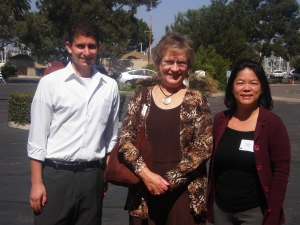 he luncheon event was titled “Redistricting: The Good, the bad and the ugly.” Mike Aguirre, former San Diego city attorney was supposed to be the fourth person on the panel, but could not make it to the event.

Dozens of people listened to the panel, intensely observing the PowerPoint presentations being shown to them. Kogan is a political science student in the process of receiving his Ph.D. and pleasantly opposed Feng’s viewpoints while presenting.

Proposition 11 passed on the November 2008 ballot and created the California Citizens Redistricting Commission, which created a bipartisan 14-member committee to draw state district lines. Proposition 11 states that applicants whom apply to serve on the redistricting commission cannot be a previous or current government employee, a lobbyist, an immediate relative of a government employee or could not have donated more than $2,000 in any year to a local, state or congressional candidate.

From the text of Proposition 11:

Kogan disagreed with Feng, saying that people who have government experience should be allowed to apply to serve on the California Citizens Redistricting Commission. Kogan said, while reiterating the text of Proposition 11, that a three-member Applicant Review Panel is selected at random from a pool of Certified Public Accountants. He said CPAs shouldn’t decide which members to pick for the commission. The text says that these three members of the Applicant Review Panel are “employed by the state and licensed by the California Board of

Accountancy at the time of the drawing.” He also mentioned that this applicant panel selects the most qualified candidates – but defining “most qualified” leaves Kogan hesitant.

What are his concerns with having the regular public apply?

“My concern with the commission is that we are going to have a group of un-elected and unrepresentative people make critical decisions – decisions that are fundamentally about core political values,” he said after the event. “Back in the early 1900s, the Progressive movement sought to take politics out of politics, and make government be run by professionals and experts…My concern is that the same thing is going to happen with this commission, especially given the unrepresentative nature of the applicants.”

As of the Thursday before the event, Feng said the 30,000 people who initially applied to serve on the were narrowed down to about 120 people. 30 percent of the applicants were Latino, 14 percent were Asian, 12 percent were African American and 5 percent were American Indian. 47 percent were women.

Gerrymandering occurs when districts are drawn for political gain.

“The current concern about gerrymandering seems to be the state legislature drawing safe districts for incumbents…gerrymandering does not increase incumbency advantage, which is the key claim … Common Cause make(s),” Kogan said. “Second, the decision to draw safe districts in California was made for defensive reasons,” going on to note that “the legislature doesn’t actually want to draw pro-incumbent districts. It only does this out of fear of the minority party.”

• To avert having strange-looking districts, because sometimes this is an indicator of what’s really going on (in the political arena);
• To end racial gerrymandering – i.e. the incumbent in a district can redraw his or her district to exclude Latino voters if he or she has a Latino challenger, so the incumbent can win re-election;
• To end extreme incumbent protection – for example, in 2001, Duke Cunningham’s district was drawn to protect him (challengers wouldn’t win because the district was drawn to have more Republican voters to re-elect him).

Feng said the city of Watts is in three districts at the state senate and congressional level and that residents are “ping-ponged” between two representatives, which makes voters unsure of who represents them, and if their interests are being represented at all.

These are reasons why Feng supports voters being directly involved in the political process, as the text states:

“The independent Citizens Redistricting Commission will draw districts based on strict, non-partisan rules designed to ensure fair representation. The reform takes redistricting out of the partisan battles of the Legislature and guarantees redistricting will be debated in the open with public meetings, and all minutes will be posted publicly on the Internet. Every aspect of this process will be open to scrutiny by the public and the press.”

Kogan, who is not fond of the proposition, thinks transparent meetings aren’t necessarily good.

“It’s basically procedural,” he said. “I don’t think the process is the end all, be all.”

Although he finds Proposition 11 faulty, he isn’t sure of how the redistricting process should be handled.

“We’re trying to balance competing concerns people have,” she said. “We wanted a bureau (of state audits) that had some staying power.”

She also understands that methods of communication can be improved in the future regarding voter involvement. She wants people to sit down at the metaphorical political dinner table and start becoming engaged with the metaphorical meal. She feels the Citizens Redistricting Commission enables voter engagement.

“One day we all might be visiting each other through holograms,” she said, while getting a chuckle from the audience, citing possible future communication ideas.

At end of the panel discussion, the audience members asked many questions. Jewell Hooper, an elderly African American woman, stood in the back of the room, off to the side, to talk indirectly to Kogan, who kept mentioning value statements in regard to redistricting.

“You talk of a community of values” Hooper said. “Who decides what that is? Activists? I see as the basic problem (is that) we call ourselves a democratic country, but so few people are participating. There is no penalty for not participating. If I worked as hard at my job as my volunteering I’d file a grievance (chuckles in the audience). They took civics out of school. The penalty is being poor and uneducated.”

The League of Women Voters’ is a nonpartisan organization with a mission is to educate people about all sides of an issue, which is why Maland, Kogan and Feng attended. Kogan and Feng have different viewpoints, but this is what ensures audience members to hear both sides.

Barbara McGill, a retired school teacher, attended the event. It was her first local League of Women Voters event.

The League of Women Voters does take positions on several propositions occurring on this year’s ballot. While some people might see that the league might lean toward one side of the political aisle, this isn’t the case.

Jeanne Brown, the San Diego organizer for the League, explained how the league operates.

“We’re progressive, but not necessarily liberal,” Brown said. “We worked for social security and healthcare long before it was passed. We only have a position after we have a year-long study; a thorough study.”

All chapters in the nation have to agree upon a certain stance on each issue before the League of Women Voters itself publishes its stance. Brown said the league sometimes is neutral regarding an issue because the league hasn’t yet studied it.

“We all have our opinions but if we haven’t done a study, we don’t (issue) a consensus,” she said.