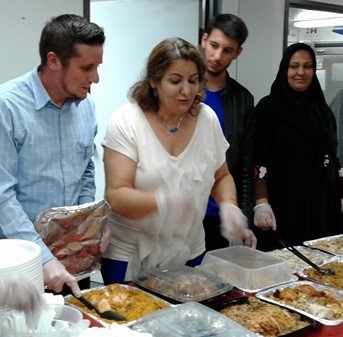 December 30, 2017 (El Cajon) – Local immigrants and refugees are giving back to the community, serving up dinner to the homeless with License to Freedom at Meridian Baptist Church in El Cajon.

El Cajon’s City Council temporarily banned feeding the homeless in public parks due to hepatitis concerns. But that ban doesn’t apply to feedings held on private property, such as churches – and Mayor Bill Wells fully approves of the activities here. 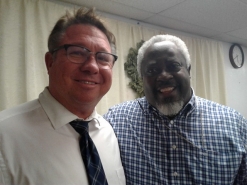 "Meridian Baptist is doing it right. They're taking care of people and they're doing it in a way that's safe and I'm happy to see everyone here given the opportunity to get a good meal," said Mayor Wells, pictured with Rev. Rolland Slade, at the monthly dinner License to Freedom has been providing for two years. 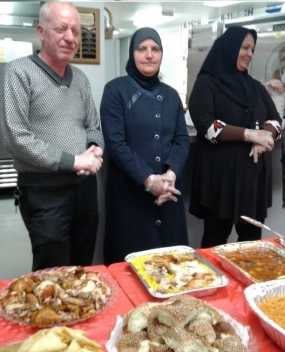 Abdul Hadi and Leena Shabo (photo, left) came to the United States in 2016 to escape violence and bombings in Syria. Shaymaa Al Mki seeks a better future here for four years and five months from Iraq.

"In the future, maybe they are here and we are there," said Jesus Pacheco of EJE Academies, who was serving the meal along with his wife Eva. "To be humble is so important."