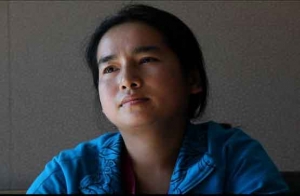 March 28, 2010 (San Diego’s East County) – Hilda Moreo, 31, spent 24 years living in refugee camps on the border between Burma and Thailand. Today, she lives in a two-bedroom apartment in City Heights with her husband, her 10-year-old son, 4-year-old daughter, and her mother.

Born in Thailand to parents from Burma, Moreo recalls hardships and fear growing up. “The government in Burma, they want to control all the people who live there,” she said softly. “They kill the little kids and the pregnant women. Sometimes they ask the old men, pregnant women to carry heavy things.” Women were often raped, she revealed.

Marilyn Nahas works with Asian refugees at the Episcopal Refugee Network (formerly known as St. Luke’s Refugee Network). She says there are about 400 refugees from Burma now living in our county—half in City Heights, the other half in East County communities such as El Cajon. In addition, there are about 100 Bhutanese refugees who have relocated here from Nepal, where refugee camps are closing down. People who have spent decades living in refugee camps are now being relocated to places around the world, including San Diego County.

Moreo’s experience is common among the new wave of refugees. When new military regimes took over Burma and Bhutan, the leadership engaged in genocide against certain ethnic groups. “They just burned their huts and villages,” Nahas told East County Magazine. “People would move and they would come and burn them again.” Some joined rebel armies or lived in the jungle for long periods of time until they could make their way to camps in Thailand.

In the camps, refugees received free medical care, mosquito nets, blankets and food. “They gave us rice and yellow beans,” Moreo recalled, “but we did not have enough nutrition…It’s really hard to survive there. It’s not easy to find a job there, to be a teacher or working in health fields…At that time we didn’t have a preschool or a nursery.”

While working as a nanny and housekeeper for a family through the American embassy, she met her future husband. Although marriages arranged by parents are common among families from Burma, Moreo made her own choice.

In 2007, Moreo finally qualified to come to America. “I have no idea about America,” she recalled. “Sometimes we watch a video, we see a big field or a city. Sometimes we dream America will be tall buildings,” she said, recalling a 26-hour plane flight to freedom. “Before I am here, I fear maybe I have no more chance to go to school.”

Three months after arriving in San Diego, she was elated to find out that she could enroll in “adult school” at City College, where she is taking an English as a Second Language (ESL) class. “Here they give opportunity for everyone to go back to school,” she said.

Moreo speaks English and can read and write, thanks to her parents, who paid to send her to a missionary school in another city. But most refugees from Burma and Bhutan are far less fortunate. Most are illiterate, even in their own languages, and have been living in primitive conditions, Nahas told East County Magazine. “They lived in bamboo thatched huts. They cooked outside; they didn’t have refrigeration or ovens.”

After arriving in San Diego, Moreo took a job first with the African Alliance Healthcare Clinic but now works with the Episcopal Refugee Network, helping other newcomers to America.  She says the language barrier is the most difficult challenge for most refugees from the region, though education, transportation, jobs and lifestyle differences are also common problems.

“It is hard to find a job for people who don’t speak the language,” she said, adding that some refugees take a bus two hours to go to work. In the camps, although life was hard, people were given free food and healthcare at a good hospital. Here, by contrast, refugees have bills to pay for rent, food, utilities and other expenses even if they can’t find work.

School is difficult for refugees who lack English language skills or worse, can’t read and write even in their native language—signing their name with a cross. Some are educated only at an elementary school level, but are required to attend high school because of their ages. There are not enough translators, so such students are doomed to failure, Moreo reflected. “They go to school and just sit. They don’t get a good grade,” she said. “Also if they have homework, the parents couldn’t help them.”

Nahas now tutors about 60 kids in City Heights, mostly from Burma, and is starting to tutor students in El Cajon. “They are wonderful people,” she said.

Her family remains separated, though most were able to emigrate to America in 2008. One brother still lives in a refugee camp, since he was unable to pass an interview. But two brothers and two sisters are now living in Texas, and two other brothers reside in Omaha, Nebraska. Her father passed away after an illness, but her mother now lives with Moreo and her husband, helping care for the children. Last year, Moreo traveled to Texas to visit her extended family.

Coping with cultural differences in the U.S. can be daunting as a parent. In her homeland, Moreo noted that people live with their parents until marriage. “Here, when you turn 18, you go where you want,” she said. “The kids have more opportunities. They have more freedom here.” But she admits to concerns over potential problems that too much freedom can lead to for some teens.

Asked if she now considers America home, Moreo grows reflective. “Sometimes we do miss our homeland,” she said, adding that she also misses other family members still in Asia. “Maybe someday, if things change, we like to go back.”

Moreo, like most refugees from Burma, is Christian due to the influence of missionaries in Asia, though some refugees are Buddhist or Muslim. Bhutanese refugees, by contrast, are mostly Hindu.

Moreo is a member of the Karen ethnic group, which has its own language and cultural traditions. In America, she was startled when people referred to her as Burmese, since in Burma, there are seven different ethnic groups. At least four of them--Burmese, Karenni, Shan and Karen—are now represented here in San Diego County.

With her people scattered to the far corners of the globe, Moreo voiced concern over losing cultural identity. She fears that someday “if the whole world wants to know the Karen people, they will have to go to a museum.”