October 9, 2012 (San Diego) -- On the flight deck of the USS Midway Museum, a floating tribute to America’s past wars, the region’s community college leaders said dwindling budgets are affecting their ability to serve those returning from today’s conflicts and heading back to school.

More than 20,000 veterans, active military and their dependents attend the nine community colleges in San Diego and Imperial counties, and their enrollment numbers are climbing because of the Middle East drawdown of forces. With four years of state budget cuts, college leaders said the results of the November election will determine whether they will be forced to make even sharper cutbacks in classes that will delay the progress of veterans and other students trying to complete their education. 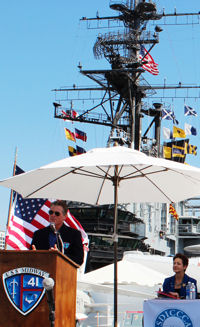 “We’re very proud to shine the light on the role of community colleges in the county to serve veterans,” Cindy Miles, chancellor of the Grossmont-Cuyamaca Community College District, said at a news conference hosted by the San Diego and Imperial Counties Community Colleges Association (SDICCCA). “But we are dealing with ever-dwindling resources.”

At the press conference aboard the historic battleship, Southwestern College student veteran Vincent Avila-Walker asked how Proposition 30, Gov. Jerry Brown’s tax measure on the Nov. 6 ballot, will affect community colleges and their ability to serve veterans. Without passage of Prop. 30, SDICCCA colleges will face midyear budget cuts of more than $30 million and 10,000 students unable to get the classes they need.

“Obviously what happens this November is of great importance to community colleges,” said Melinda Nish, superintendent/president of Southwestern College and SDICCCA vice president. “If Proposition 30 fails, every college represented here will suffer a significant, permanent cut in revenue and it will impact the services and courses we can provide to veterans and all of our students.”

Student veteran Stephen Faille said that while the priority registration afforded to active duty military and veterans places them first in line when selecting classes, he and others like him still feel the sting of classes lost as a result of  the ongoing state budget crisis.

“Priority registration is wonderful, but it doesn’t help with cut classes,” Faille said. “It doesn’t help when I have to go to Ventura to take anthropology because I can’t get it here. I did what I had to do as a veteran. What can we do now?”

Constance Carroll, San Diego Community College District chancellor and SDICCCA president, responded that a “lack of foresight” led the state to make huge budget reductions that have forced colleges throughout California to slash classes and turn away hundreds of thousands of students.

“If Proposition 30 fails, it will mean the most catastrophic cut yet and so we are hopeful that the state will restore our classes and enrollments and its commitment to the people, especially our veterans,” she said. “We are at a crossroads where the general public will have to make a difficult decision and we hope it will make it on the right side.”

Like more than 2,100 veterans attending Grossmont and Cuyamaca colleges, Dile decided to use the new G.I. Bill to attend college, a benefit earned from a 2005 deployment to Iraq. He said the programs and services for veterans helped him make the successful transition despite a traumatic brain injury from a roadside bomb explosion and post-traumatic stress syndrome resulting from a 15-month tour of duty.

“It was a difficult process to wrap my head around the school system, but Grossmont College is a college that understands what we need as veterans,” said Dile, who transferred last fall as a Grossmont College honor graduate to the University of San Diego. “Community colleges have a grasp on what veterans need. Yet the colleges are constantly getting cut on budgets.”

Paul McNamara, a Palomar Community College District trustee and a retired U.S. Marine colonel who helped plan and execute the post-9/11 Marine Corps operations in Afghanistan and Iraq, praised the courage and character of the young military men and women who have pledged to lay down their lives in the defense of the nation.

“They have demonstrated in a time of war, at a very young age, a trait that eludes many – they have chosen to embrace the values of honor, courage and commitment,” he said. “We should not let this resource and potential go to waste. We must continue investing in the institutions of higher learning.”

Francisco Rodriguez, superintendent/president of MiraCosta College, said with more than 1,700 active duty military and veterans, the North County college has seen a 150 percent increase in that population over the past decade.

“Today is a salute to you – we are ready to serve and respond to the surge in veterans and active-duty enrollments to our colleges,” he said, adding that community colleges are the colleges of choice of many returning  military members and veterans. He said the Veterans Administration has estimated that a quarter of veterans using the new G.I. Bill education benefit are attending community colleges.

“But we have our challenges,” he said. “The California Community College system has seen its budget slashed by 12 percent since 2008, and has had to reduce access to hundreds of thousands of students, including many veterans.”