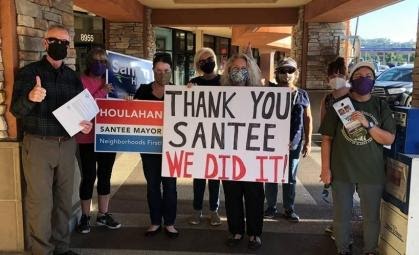 By Mike Allen
December 17, 2020 (Santee) -- The county Registrar of Voters certified that a challenge to the largest housing project in Santee’s history is successful, verifying that enough valid signatures needed to qualify for a public vote were collected.

Opponents to the 3,000-unit housing development in the city’s northwest section led by Preserve Wild Santee, an environmental political action group, delivered 6,236 signatures to the City Clerk’s office in October following the project’s approval by the City Council in September.

That number was nearly twice the minimum needed, a comfortable cushion to yield the amount verified as valid: 3,584.
The verification means that the Santee City Council is faced with the decision to either rescind the project’s approval, or place the issue before Santee’s voters in either a special election or on the next general election in November 2022.
Given the city’s fiscal constraints, especially following a year when the pandemic laid waste to a significant share of sales taxes, it’s likely the Council will opt to wait until the next general election in two years to place the issue on the ballot.
Coupled with the passage of Measure N, it’s clear that a majority of Santee voters want to weigh in on the Fanita Ranch project. Measure N calls for any new development that does not conform to the city’s General Plan to go to a public vote. It passed by a 908-vote margin, 15,720 to 14,812.
Whether that measure includes Fanita Ranch is debatable. Fanita Ranch required zoning amendments that allow higher density building on the property. In addition to nearly 3,000 housing units, the project involved about 80,000 square feet of commercial space, as well as a fire station and possible elementary school.
Proponents of Measure N say it applies to all projects approved in the past year, including Fanita Ranch passed just a couple of weeks before the November election.  But that view would likely be challenged in the courts.
HomeFed Corp., the publicly held development company for Fanita Ranch, pumped about $300,000 into a campaign to persuade local voters to support the project, as well as vote against Measure N. The developers argued it would invest millions into improvements to Highway 52, local roads, access to the property, and the addition of a new fire station. The company hired workers who sometimes attempted to interfere with people trying to get signatures to the anti-Fanita Ranch petition.
Jeff O’Connor, HomeFed vice president, said he was surprised by how quickly project opponents collected the large number of signatures during a time when the COVID-19 infection was surging.
“It’s too bad that the Santee residents will have to wait two additional years for improvements to SR 52, access to use Fanita Ranch for hiking and biking, and maybe most importantly, the new fire station that could have been used to help fight yesterday’s fire,” O’Connor said, referring to a brush fire near Cuyamaca Street that broke out Dec. 16.
Opponents said the 8,000-plus new residents that Fanita Ranch housing would bring in would even worse traffic issues and present life threatening situations in the event of a mass exodus should a large wildfire erupt. They also objected to the loss of open space and destruction of wildlife and loss of the last large swath of undeveloped land in the city.
Javier De Anda, the county elections processing supervisor, said it took the verification of 4,231 signatures to reach the minimum of 3,584 signatures needed to qualify. That meant 647 signatures were found not to be valid. Once the minimum was reached, the group opposed to the project requested the verification of the remaining signatures be stopped, De Anda said.
Van Collinsworth, director of Preserve Wild Santee, said while the signature gathering was done by a large group of volunteers, his organization also contracted with paid workers to ensure the effort was successful.
He said it’s unlikely the Santee Council will rescind the Fanita Ranch approval, given that “developers own all five GOP seats on the City Council,” a reference to developer donations made to councilmembers.