March 2, 2020 (Casa de Oro) – “This has been an 18-month effort,” Bob Yarris, president of the Casa de Oro Alliance, said at a community visioning workshop held Feb. 25 at the Spring Valley Academy. A half-million dollar grant has been awarded to the Alliance, a 501c3 nonprofit, by the San Diego Association of Governments (SANDAG) to create design guidelines and revitalize the heart of Casa de Oro.

More than 50 community members saw a presentation by county officials, then had an opportunity to share their ideas in breakout sessions, adding a variety of creative visions. 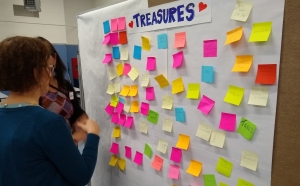 The revitalization will include the Campo Road corridor from Granada to Kenwood.  So far, traffic and market feasibility studies have been doe as well as interviews with residents and business owners, youth outreach, and pop-up events.

Next, the audience joined in “Post-it note visioning.”

Each person was first asked to name “treasures” in the community, with the audience naming schools, the Santa Sophia Church, a diverse and friendly neighborhood, the library, access to trees and nature, and specific businesses such as local restaurants, a bakery and a coffee shop.

Under “challenges,” many post-it notes submitted listed the lack of homeless services and shelters, vacant storefronts and hodge-podge design, the need for a modern library, traffic, lack of bike lanes, a need for more lighting, family0friendly spaces, and lack of a city center.  Some wanted to see public art, a community symbol, community gardens, and other creative endeavors. 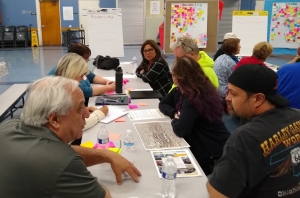 For “visions,” the ideas included sidewalk cafes, landscaped walkways and bike paths, an urban forest, pollinator garden, a dog park, diversity of businesses, bringing in a winery, brewery, recreation center and playground, an outdoor gathering place, and murals to beautiful buildings and an alleyway.

“Community events” desired include outdoor concerts, a farmer’s market, multicultural festival, art events, events centered around a new library, plus a Boys and Girls Club with activities for kids and families.

Many also want to eliminate businesses viewed as undesirable such as illegal marijuana dispensaries, alcohol and tobacco shops.

Small groups formed to delve into details on specific topics.

A group working on “identity” proposed a motto contest for Casa de Oro, which they defined as “a small town with a big view.”

The “arts and culture” group proposed using art to create a sense of community including visual and performing arts, with activities such as open mike nights, a film festival, art shows and events to celebrate the community’s diversity. 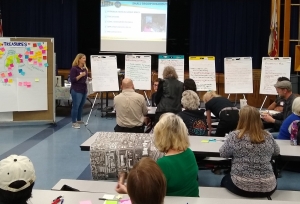 An “architecture and buildings” group proposed regulations to improve aesthetics and create a sense of place such as in Little Italy. They want to move buildings up closer to the road with diagonal street parking, some buildings facing each other, and by  building “up, not out” with three to four stories stepping up. These could be mixed use with residential on top and retail/business uses on the lower portion.  They proposed diagonal street parking and roundabouts as well as opening up space around Sana Sophia and creating a plaza. They proposed a larger scale redevelopment of additional blocks.

The “open spaces” group proposed a green media with jacaranda trees, increased shade and lw-water landscasping, landscaping at commercial facilities, as well as grander dreams such as removing dilapidated buildings to create a park and adding walkways and bikeways along a restore Sweetwater Creek.

Another group dealt with roads, walkability and bike lanes.  They envisioned safe routes to school with a lighted, flashing sidewalk, street calming such as roundabouts, separate bike lanes, and removing walls between parking lots of retail centers.

The event even including options for children to express themselves with drawings to show their visions for the community.

If you missed this session, Yarris promised, “There will be more meetings to look at projects and alternatives,” as the vision for revitalizing Casa de Oro moves forward.