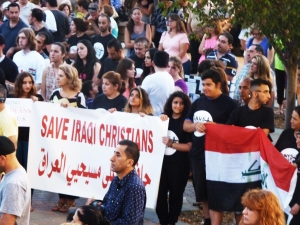 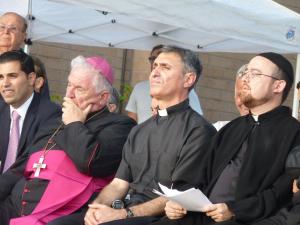 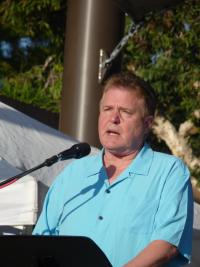 Religious leaders from across our region also spoke.

Evangelical Pastor Jim Garlow of Skyline Church stated, “If refugees come here, we welcome them and embrace them.”  He denounced the global persecution of Christians and Jews, as well as a “Christian Chaldean Holocaust” in Iraq. “Christians are being hung and crucified,” he said.

To the thousands of Chaldeans and others gathered in El Cajon’s plaza, Pastor Garlow said, “God has chosen you to be a light to the nations…You will help America rise to its finest moment.”

The prayer vigil was organized by City Transformation, the San Diego Leadership Forum and the Chaldean Council for Public Affairs. Michael Griffiths with City Transformation, the driving force behind the event, spoke first. “I know that God is smiling on this gathering,” he said, gazing out at the crowd of solemn faces, many concerned about the safety of their loved ones still in Iraq.  Some wore shirts or carried banners with messages asking America to save Iraq’s Christians.

Deacon Michael Esshaki with St. Peter Chaldean Catholic Cathedral in El Cajon offered chilling details on the situation in Iraq, which has worsened even since an ultimatum was issued days ago that offered Christians an option to pay a hefty tax to avoid being slaughtered. 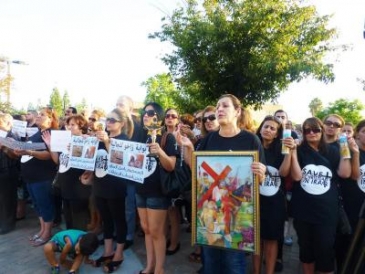 Now, he revealed, “They took the tax option out.” Christians who refuse to convert to Islam now have only two choices.  “Leave with only the clothes on their backs, or die by the sword.”  He praised the courage of the Iraqi Christians , adding that he has heard that “not even one agreed to deny the Lord at all cost…They are willing to give up everything.”

For those who choose to flee, the exodus is marked by brutality and danger.

Deacon Esshaki told of families leaving in cars with their children, only to face mistreatment at the hands of ISIS guards.  “Here is what the savages did,” the Deacon said.  “They stole their cars and everything—even their water and their food, money and jewelry, and beat them.” Families were “forced to walk in the hot desert for hours,” he added, likening the trek to walking from El Cajon to El Centro with no food or waters, after already losing their homes.

Those who fled have had their homes marked with a red letter “N” for Nazarene, followers of Jesus of Nazareth, and seized by the Muslim state.  One man who refused to leave his home was “stabbed 11 times and killed," the Deacon stated.

Families have been murdered.  As ECM reported last week, heart-wrenching photos from Middle Eastern media show a child beheaded and a woman who was raped, then murdered with a crucifix piercing her throat.

A guard seized one fleeing woman’s baby, until she gave him money from her purse and the child was returned. 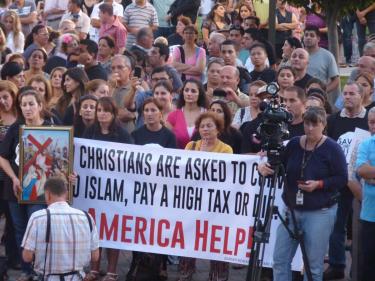 A later speaker said that one act of mercy shows “hope for the souls of these terrorists”; then he asked God to “forgive them and bless our enemies.”

The Deacon said Iraq was once home to over 600 monastaries. Today there are only a handful and in Mosul, they are being burned—including a church founded by the apostle St. Thomas over 1,800 years ago.

He praised America for allowing this public gathering, adding, “If we did it in  Iraq today in Mosul, we would be killed.”  He said the prayers and support of people in El Cajon has “made our pain more bearable.”  Later, he called for pressure on Congress and the White House to “speak up and do something” to save Iraq’s Christians.

For the first time in 1,800 years, mass services have ended in Mosul, he stated.  Violence has also targeted the clergy.  Priests have been beheaded and others ruthlessly murdered. The Archbishop of Mosul was “killed, tortured, his body thrown in the garbage,” Deacn Esshaki ,

El Cajon is home to about 40,000 Iraqi Chaldean Christians, as well as Assyrian and Syriac Christians from Iraq.  The Mayor’s offer of safe haven is a remarkable one in a city that struggles with San Diego County’s highest poverty rate, as well as high rates of unemployment and homelessness.  In the past, some city residents voiced trepidation over the influx of refugees during the Iraq war and the appearance of signs in store windows in Arabic or Aramaic.  But the Iraqi refugees have proven to be hard-working, loyal and grateful residents—opening up shops, helping to revitalize the city’s Main Street that had long been blighted—earning the admiration of many here.

Some of the newcomers came in fear, having seen brutality at the hands of Iraqi security forces. 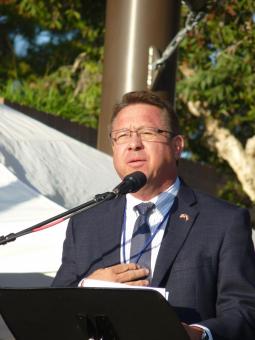 The Mayor, a conservative Christian, was appointed to fill the Mayoral vacancy left by Mayor Mark Lewis' resignation.  At the vigil, he made clear that he understands that many Christians fleeing “knives and persecution and death” in Iraq will likely receive refugee status and be brought to the United States, ultimately making their way from other cities to San Diego, where they have relatives and friends.  “Christians will be welcome here in El Cajon,” he assured those present.

Then he stated he was stepping out of his official role and speaking as a Christian himself. “I am begging you to get on your knees tonight and pray” for a “miraculous intervention” to save Iraq’s Christians.  He added that he is working with political leaders to seek solutions, but added, “Really this is a spiritual problem.  Please do not despair…in the end, we will win.”

A man named Yusef spoke to say that his brother informed him their father was killed by a group of terrorists in Iraq last week.  “He was a kind and innocent man, 71 years old..Is there anything worse in human history than this persecution and murder? And yet, the world is silent.”

Noori Barka, a local Iraqi community leader, thanked Christians in Iraq for “showing the world how strong your faith is.” Then he said, “This evening, El Cajon is asking world leaders, especially our president, to wake up, to stand up and to act to protect Christians of Iraq” by creating a safe haven. 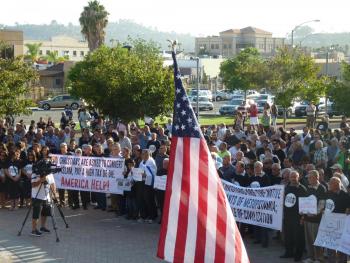 Zach Wilbur, a college student, said young people should be concerned about the rising violence against Christians in Iraq and around the world because”life and freedom of religion are worth fighting for.” He said he would not want to live in a world where anyone who disagrees with you is wiped out.

Then he warned of the consequences of inaction. “How long until this hatred is on our doorstep?”

Councilman Tony Ambrose read a resolution from Assemblyman Brian Jones (R-Santee). “We should all be concerned about Christian persecution or any religious persecution,” the resolution said, also offering prayers for families undergoing persecution.

A representative from State Senator Joel Anderson (R-Alpine) said the persecution of Christians in Iraq “can only be called genocide.”  The East County legislator will amend Senate Concurrent Resolution 17 to ask the federal government to provide resources that will provide a refuge for the persecuted Christians of Iraq.

Other political were also present in the crowd, including El Cajon Councilmembers Gary Kendrick and Star Bales.

A collection box was passed through the crowd, raising money for humanitarian aid that will be sent to the Bishop in Mosul to help fleeing familes there. Donations may also be made  online at www.GoFundMe.com/SaveIraqiChristians. 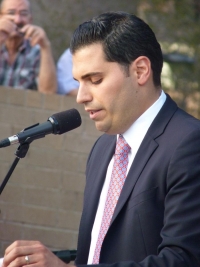 a national leader of the Iraqi Chaldean community and head of the Neighborhood Market Association, has made trips to Washington D.C. to meet with members of Congress and the Obama administration.   “We have a resolution crafted,” he revealed, praising both Congressman Juan Vargas (D-San Diego) and Congressman Duncan Hunter (R-El Cajon), whose districts include much of East County.  House Resolution 663 would express the will of Congress to give minorities in Iraq a chance to live in peace.  Next up, he said he will be speaking with representatives of the United Nations.

“Today, we face an evil unlike any other,” Arabo told the crowd. “The heinous acts of ISIS can never be condoned…Everyone here tonight is witness to stories of heroism…It is through hope that we will endure.”

He added, “Our fight starts in Congress and ends only when we can say that minorities can live in peace in Iraq…let’s all be agents of change.”

Arabo said that while terrorists may shake the foundations of Iraqi Christians’ homes and churches, “they will never break our resolve. “ He concluded that “Christianity will never die. We will always fight…but with prayers and democracy.” 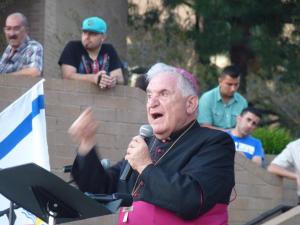 Last to speak was Bishop Sarhad Jammo with the St. Peter Chaldean Diocese.

“I represent 4,000 years of a spiritual march of history,” he said.  “It started with Abraham. It peaked with Jesus. And now we are marching with him to Heaven.”

In an impassioned voice, he cried, “Do you think this will break us after 4,000 years?”  The Bishop added, “Sacrifice. Martyrdom. Persecution. We have seen it all. It will not break us. It never did.”

He said Iraqi Christians are “privileged” to be in El Cajon, California, and the United States and called their presence here “providential”  as El Cajon residents “transform our country to be aware of the rights of Christians to be free.”

He praised the Congressional resolution  as a “great act forward” if it passes.

But the Bishop made clear that it is “not enough to save our lives.”  Christians everywhere “have to be equal to everybody,” he concluded. “The constitutions of every country must be adjusted to say that, otherwise they are not worthy.” He called for “human dignity for everyone…This is our call: to be together in this city. To have a cause. To have a march,” and to convince leaders to protect the rights of all to live “in freedom and with dignity.”

The Chaldean Bishop ended by thanking the pastors, leaders and people of El Cajon for their support.  “This is our home,” he concluded. “We are one, to march toward human dignity and the elevation toward Heaven.” 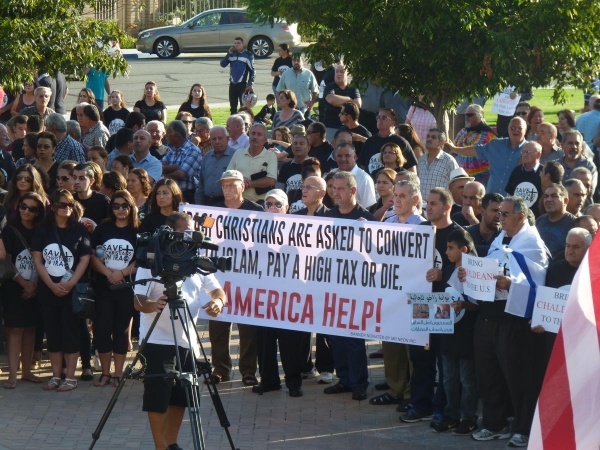 One of the biblical readings at the Sunday Mass at Our Mother of Perpetual Help Syriac Catholic Church in El Cajon contained a passage from Ephesians, complete with the warning "do not leave room for the devil." This, according to a story by Tony Perry in yesterday's Los Angeles Times Newspaper. The passage had a particular poignancy for the 300-plus parishioners attending the overflow Mass because, as one parishioner explained, "The devil is loose in our homeland." All but a handful of the parish families are recent immigrants from Iraq.A church service in Arabic and Aramaic makes them feel more at home in their new country, according to the story by Perry in the LA Times. The Church's Pastor, Msgr. Emad Hanna Al-Shaikh, led Sunday Mass for the more than 300 parishioners, Iraqi Christian immigrants who fretted about their homeland.