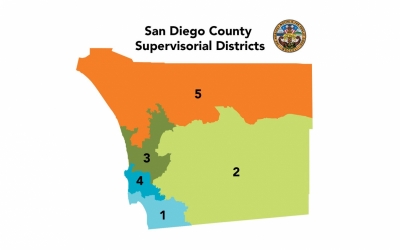 November 25, 2020 (San Diego) - All 14 of the required members for the County’s new Independent Redistricting Commission are now on board. The final six were selected on Friday.

The commission is responsible for redrawing the boundaries of the County’s five supervisorial districts. The districts are required to have relatively equal populations and meet other legal standards. District lines must be re-evaluated every 10 years after new federal census numbers are released.

The 2020 census will show whether the populations of the districts are out of balance and how the characteristics of the population of each district may have changed.

The eight new commissioners had the responsibility of selecting the remaining six members based on a number of requirements specified by the California Elections Code.

Commissioners are also required to have relevant experience, analytical skills, the ability to be impartial and experience that demonstrates an appreciation for the diverse demographics and geography of the County of San Diego.

The six who met these requirements and were selected by the initial eight commissioners are:

The makeup of the overall commission largely reflects the county’s diversity.

The commission is evenly split between seven women and seven men. The average age is 58 years old.
The full commission will hold its next meeting in mid-December. The public may sign up for email updates, watch virtually or participate via teleconference.
Before the Redistricting Commission draws a draft map, it must hold at least seven public hearings with at least one hearing in each supervisorial district. Other meetings, dates and times are at the discretion of the commission.
The group will review the new census data when it’s released and start the process on redrawing new maps for the five supervisorial districts. The maps must be completed by Dec. 15, 2021.
For additional information, email redistricting@sdcounty.ca.gov