February 28, 2015 (Alpine)—“Remembering our Fallen”, a memorial photo exhibit honoring  710 Californians killed in the war on terror in Iraq and Afghanistan (including 77 local residents) is now on display at the Alpine Wall of Honor. The exhibit, adjacent to the Alpine Community Center at 1830 Alpine Blvd. in Alpine, is open from  8 a.m. to 8 p.m. now through March 7th. 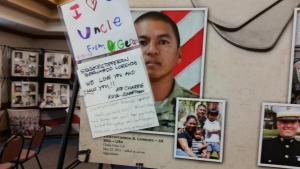 The display arose from  Vietnam Veteran Dan Foster’s idea to say “Thank You” to honor our veterans started with a plaque on a rock in 2009, and today is the beautiful Alpine Wall of Honor with tiles of 500+ who have served or are still serving our county. 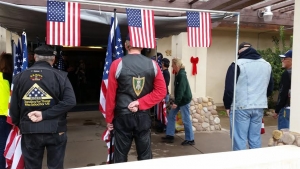 The Wall has gained national attention due the recognition by the Ford Good Works program, which spent three days in Alpine filming a feature that aired on CBS sports stations internationally and is accessible on YouTube: Ford. A ceremony to say “Thank You” is held every time there is a new row of tiles added. 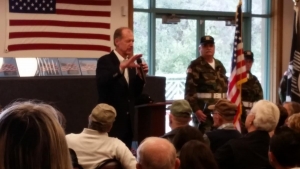 This exhibit, and 13 other state exhibits, has been created by Patriotic Productions, a non-profit organization, in Omaha, Nebraska.  Their goal is to complete an exhibit for every state. More information at: RememberingOurFallen.org or PatrioticProductions.org.