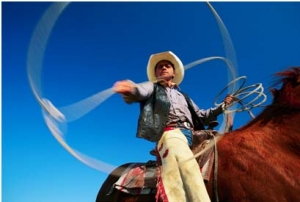 The City of Poway, along with living history groups from Shadow River Regulators, Cimarron Ridge Old West Productions, and the Apache Canyon Gang, present the annual Rendezvous in Poway. History comes to life from the 1820-1890’s at this free event onSeptember 11  and 12.

Recommended Dress for Rendezvous in Poway

The Rendezvous in Poway is based on a traditional gathering of early residents of North America. These included Native Americans, fur trappers, traders, explorers and adventurers who, prior to the development of cities and towns, would come together at a prearranged time and place in order to trade and barter necessities.

This year we are inviting the community to join us in bringing history to life at Old Poway Park at the Rendezvous in Powayh. The time period that is being revisited spans the 19th century which is 1800 to 1899, or thereabout, and it is relatively inexpensive to dress up as a your favorite character from the days when the American West was young. If you don’t have a beaver hat, buckskin leggings, or moccasins lying around the house—don’t fret, the following information will help you out.

Women would tie their hair back or wear it up and they also wore straw, lace and fabric hats and would sometimes decorate their hair with flowers or a bow. Their blouses were long or three- quarter sleeved of a solid color, small calico print or striped. Their skirts were long enough to reach the ankle and full enough to walk comfortably and some would wear a full length petticoat or a second skirt underneath the top skirt. The shoes they wore were simple leather shoes or boots. The ladies would accessorize with knee socks rather than nylons and knitted, crocheted, or lace shawls. They would wear bow ties or cameos around their necks and would sometimes wear a smock.

Imagine who you would have been and what you would have worn if you had been born in the 19th or early 20th century. You can find information and pictures on the internet, old family photos, or at the library. Just give it your best shot and join us as we create a living history at Old Poway Park during the Rendezvous in Poway!