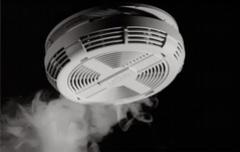 May 3, 2016 (San Diego) -- Not long ago, I spoke with a renter who told me about some trouble he was having with a smoke detector in his San Diego apartment.

The device was installed on the ceiling just outside a bathroom, and unless the bathroom door was securely shut, the steam from a hot shower would set off the alarm. This resident said he and his roommates had resorted to covering the hypersensitive smoke detector with tape and a paper towel.

Please, don’t try this at home!

California law requires landlords to install and maintain smoke detectors in rental properties, and for good reason: Smoke detectors are one of the cheapest and most effective ways to save lives and protect property in the event of a fire. But since fires happen so rarely, most residents’ interactions with their smoke detectors are more likely to be false alarms from burnt popcorn or incessant chirping from a battery that needs to be replaced.

If you’re having trouble with a smoke detector that is too sensitive or needs a new battery, don’t bother trying to fix it yourself. Call your landlord or property manager and ask for their help. Not only is it their job to keep the smoke detectors in good working order, it’s also in their own best interest to protect the investment they have made in the property. They will be happy to come in and make any adjustments necessary.

In the past couple of years, California has adopted some additional laws that should make it even less likely that you’ll have a problem with a smoke detector. Beginning this year, when a landlord replaces a smoke alarm, they must replace it with an alarm that has a “hush” or silencing feature. This allows the resident to press a button that easily turns the alarm off if there’s not actually a fire — no more furiously fanning the device with a towel or removing the battery to get the alarm to turn off.

The law now also requires that new battery-powered smoke detectors come with a battery that cannot be replaced or removed; the battery must be able to power the smoke detector for a minimum of 10 years. This should make it far less likely that you’ll ever hear chirping from an alarm that needs a new battery.

The new laws allow landlords to keep their existing smoke detectors in place as long as they are still in working condition, so renters will likely see this new generation of devices appear gradually rather than all at once. Smoke detectors are now also required in each bedroom or sleeping unit. Your landlord will periodically come inspect detectors to make sure they are properly maintained.

Despite the occasional annoyance, smoke detectors serve a vital purpose for both renters and landlords. Keep them in good working order and you’ll be in good shape in case of a real emergency.