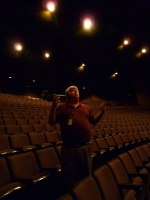 It has been said that the opera isn’t over until the fat lady sings.  Those who had hoped El Cajon’s East County Performing Arts Center would be open by December may have a bit more waiting to do until the proverbial fat lady sings.

While El Cajon City Councilman Gary Kendrick had set a target date of December 1, 2013 for the much anticipated reopening of the theater which has been shuttered for nearly three years, it may be at least another year until the curtain opens and the stage lights come on.

“The wheels of government often turn way slower than one might hope,” the councilman told ECM. “I’ve been advised by the City Manager, Doug Wiliford that it is taking a little longer than originally anticipate to write out the RFPs (Request For Proposals) and put them out to be bid on by local contractors….after the bids have been received and vetted, it is only then work can start to refurbish the theater.”  Kendrick also said that he has been advised that events cannot be held at the venue until the work has been completed.

In July, the El Cajon City Council unanimously voted to begin the process of hiring an architect to analyze the renovations needs to reopen the theater.

Wiliford has openly stated that this is an opportunity for the city to bring about long-term quality improvements to the facility.

Funded by the recent sale of the El Cajon Police department’s former building on Fletcher Parkway, the city plans on replacing the roof on the nearly forty year old theater, conforming the facility to current Americans With Disabilities standards, and installing new carpeting, and a “smart lighting” system, among other planned improvements.

East County Magazine sought a comment on the latest developments regarding the refurbishing and reopening of the theater from Ray Lutz, an outspoken critic of the council’s past actions regarding the theater, but did not receive a response.

In April, the city council proposed building a conference center adjacent to the theater in conjunction with the Grossmont Union High School District, but the idea was eventually shelved by the district’s board of directors.