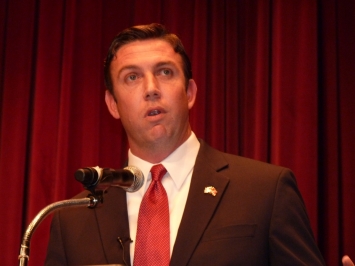 August 22, 2018 (San Diego’s East County) – Congressman Duncan D. Hunter and his wife, Margaret, have been indicted on federal charges of conspiring to commit wire fraud and falsifying campaign records to take over a quarter of a million dollars in campaign funds and use them for personal expenses, the U.S. Attorney’s Office announced yesterday.

The indictment alleges that the Hunters also falsely represented personal expenses as purchases made to help wounded veterans and other charitable causes. in addition, a letter from Hunter's attorney to the Justice Department reveals, prosecutors suggest campaign funds were spent on "extramarital infidenlities and excessive drinking."

House Speaker Paul Ryan issued an announcement which states, ““The charges against Rep. Hunter are deeply serious. The Ethics Committee deferred its investigation at the request of the Justice Department. Now that he has been indicted, Rep. Hunter will be removed from his committee assignments pending the resolution of this matter.”

Hunter has issued a statement calling the action politically motivated, adding, "This is evidenced by the fact that after two years of investigating, the Department of Justice decided to take this action right before my election. For over two years, I have made myself available to cooperate with this investigation in any manner. To date, I have not been asked one time to answer any questions or address any issue. I have not had one opportunity to present my side of anything in this investigation or to counter any allegations against me. All the while, there has been a constant barrage of misinformation and salacious headlines in our media regarding this matter."

Hunter says he chose to remain silent rather than feed into what he calls a "witch-hunt," trusting in the process."I have focused on one thing; doing the job with which I was elected to do. I have worked to represent my constituents, voting on policy issues that I believe would benefit our nation and opposing those that would do us harm. I have helped those having problems with federal agencies and advocating for those who have fallen through the cracks of bureaucracy. This is what I will continue to do, these efforts will not stop, and I am not going anywhere."

According to the U.S. Attorney’s office, the 48-page indictment details scores of instances from 2009 through 2016 in which the Hunters illegally used campaign money to pay for personal expenses that they could not otherwise afford at a time when their personal accounts were overextended.

Prosecutors contend that family dental bills paid with campaign funds were characterized as a charitable contribution to “Smiles for Life.” Theater tickets were mischaracterized as “holiday gift certificates.”  Tickets for the family to see Riverdance at the San Diego Civic Theater became “San Diego Civic Center for Republican Women Federated/Fundraising.”  To disguise their children’s tuition payments to Christian Unified Schools in El Cajon, the Hunters provided a number of conflicting explanations, including that the payments were charitable contributions, the U.S. Attorney reports.

“The indictment alleges that Congressman Hunter and his wife repeatedly dipped into campaign coffers as if they were personal bank accounts, and falsified FEC campaign finance reports to cover their tracks,” said U.S. Attorney Adam Braverman. “Elected representatives should jealously guard the public’s trust, not abuse their positions for personal gain.  Today’s indictment is a reminder that no one is above the law.”

Hunter’s attorney, Gregory A. Vega of the Seltzer Caplan McMahon Vitek law firm, in a letter to Deputy Attorney General Rod J. Rosenstein dated August 6th,  claimed the investigation was biased and stated that two prosecutors attended a fundraiser for Hilary Clinton, though they did not purchase tickets or donate to her campaign. (The indictments were filed on recommendation of a 12-member Grand Jury).

Vega had asked that the indictment be postponed for an “impartial review” and suggested the timing could influence the outcome of the November election. The attorney also objected to “personal indiscretions of the Congressman that the prosecutors seem intent on charging” noting that prosecutors “even said they have `pictures’ to prove it” for the reported aim of demonstrating “spending of campaign funds for extramarital infidelities and excessive drinking.”

Vega adds, “While there may be evidence of infidelity, irresponsibility, or alcohol dependence, once properly understood, the underlying facts do not equate to criminal activity; these allegations are, however intended to embarrass and humiliate the Congressman shortly before a crucial election, and also to alienate him from his wife, the only other person under investigation and his intended co-defendant.” 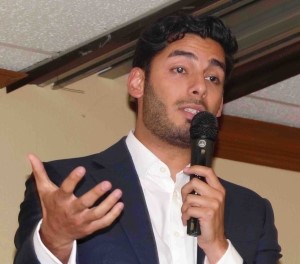 Hunter’s political opponent, Democrat Ammar Campa-Najjar, issued this statement upon news of Hunter’s indictment yesterday: "The division, chaos and corruption in Washington has gone too far. Today’s indictment confirms just how deep this corruption can reach when someone like Duncan Hunter Jr. is in it for himself instead of representing the people. Now is the time to put country over party and rise against this corruption and rise above the divisive politics. Together, we can bring real change and fresh thinking to represent the people of CA-50." View video.

There is no mechanism for Republicans to replace Hunter on the ballot, even if he were to withdraw from the race or resign.  Any trial would likely take months, raising the prospect of voters forced to foot the bill for a special election to replace Hunter in Congress if he is convicted on felony charges, which could result in years of imprisonment. Under California's top-two primary system, only two names are on the November ballot i n the 50th Congressional District: Hunter and Campa-Najjar.

Noah Bookbinder, Executive Director of Citizens for Responsibility and Ethics in Washington (CREW), a nonprofit watchdog group, has called on Hunter to resign.

"Congressman Hunter and his wife have shown a blatant disregard for the law and for the people who contributed to his campaign, spending a quarter of a million dollars from his campaign for his personal benefit. When CREW filed multiple complaints against Congressman Hunter for spending campaign funds for personal use in 2016, we believed he was violating the law but had no idea of the systematic and deceitful lengths to which he and his wife had gone,” Bookbinder states.

The ethics expert adds, “We are glad to see Congressman Hunter will finally be forced to face the consequences for executing one of the most breathtaking and egregious Congressional spending scandals in recent history. Today the Justice Department is sending a clear message that you cannot abuse your campaign for your own personal benefit.  Given the scale and scope of his misconduct, Congressman Hunter should resign immediately.”

“This the latest evidence of a crisis of ethics that is gripping Washington,” he concludes. “Rigorous enforcement of the law is the first step to restoring trust and ethics to our government."

The Hunters are scheduled to be arraigned on the indictment on Thursday at 10:30 a.m. before U.S. Magistrate Judge William V. Gallo.

I voted for him because I know and respect his father, who I feel served us well for many years. But I won't vote for the son again unless a jury finds him not guilty.

Good work, Miriam, on this article about Duncan the Dumber.  Unlike several other similar articles in major news outlets, this piece answered all my questions, especially those about the coming election.

This indictment of Congressman Duncan Hunter is a painful and ironic reminder of the earlier indictment and incarceration of Randy "Duke" Cunningham many years ago when I lived in San Diego. At the time San Diego and the area was known and referred to as "Enron by the Sea". Randy "Duke" Cunningham was charged and convicted of similar crimes as Duncan Hunter, and served many years in prison. I actually attended the sentencing hearing for Cunningham, in which he asked the judge to stay out of prison long enough to attend to his mother, but the judge refused. I say that this is a "painful" reminder, because I can't imagine anyone being locked away in what amouts to cages for an extended time, something that Paul Manafort and Michael Cohen are now facing. Being from Chicago, I know many politicians that committed similar crimes and went to prison, such as the former Governor of Illinois.