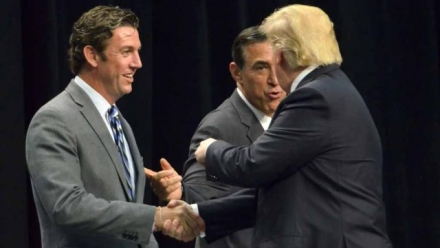 October 18, 2019 (San Diego) - Rep. Duncan D. Hunter had President Trump’s back Wednesday — even breaking with his party on what fellow veterans call the betrayal of U.S.-allied Kurds.

Hunter was among 60 Republicans to vote nay.

The Marine combat veteran, fighting for his political life in the 50th Congressional District amid federal corruption charges, stood alone in the San Diego County delegation. 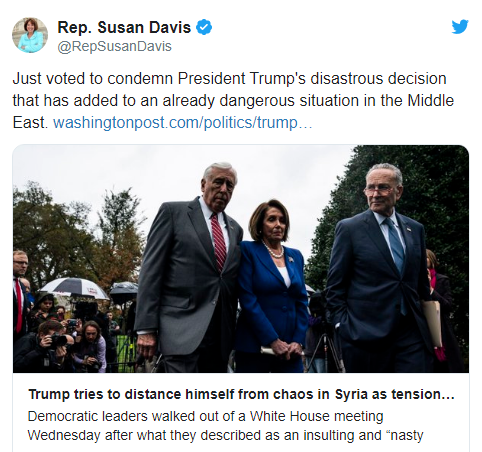 Hunter was one of only two California Republicans to oppose the resolution, joined by Tom McClintock of Central California’s 4th District.

Michael Harrison, Hunter’s spokesman, explained the vote by noting the president ran on a promise of removing the United States from “endless wars and engagements.”

Second, Harrison said, “This is consistent with the Hunter Doctrine: You kick ass and you leave.”

American forces have defeated ISIS and should leave, he told Times of San Diego via email.

“If it is necessary for the U.S. to re-engage and defeat ISIS again, we can and will, but there is no reason to have our military in this region as a permanent fixture,” Harrison said on behalf of Hunter.

(But eight years ago, Hunter was for a long U.S. Mideast troop presence — in Afghanistan, at least. “I think we need to have military there for the next 30 or 40 years,” he told Patch editors, although at “a much smaller, smaller level, mostly intelligence and special forces.”)

Wednesday, Harrison added: “We will continue supporting the Kurds, like we have been, including in Northern Iraq, but at the end of the day this is [a] conflict between Turkey and a tribe in Northern Syria. They are not a standing nation state and the U.S. does not have a formalized agreement to remain there permanently.”

But Harrison noted that Hunter is an original co-sponsor of a new bill by Wyoming’s Liz Cheney that calls for sanctions on Turkey in response to Ankara’s military offensive against Kurdish forces.

Hunter thus sides with 52nd District Rep. Peters, who said in a statement: “America must remain a diplomatic leader worldwide, which is why we also must vote on strong bipartisan, bicameral sanctions against Turkey, so some of this chaos might be contained.” 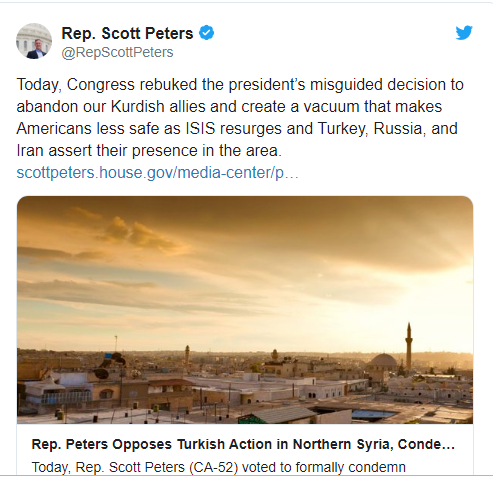 Peters called the 354-60 vote against Trump’s action a rebuke of “the president’s misguided decision to abandon our Kurdish allies and allow a deadly Turkish incursion into Syria.”

“Tragically, the damage is done,” he said. “Our withdrawal subjects Syria to mass regional destabilization and the Kurds to potential war crimes. It also created a vacuum that makes Americans less safe as ISIS resurges and Turkey, Russia, and Iran attempt to assert their presence in the area.”

Davis said via Twitter: “Just voted to condemn President Trump’s disastrous decision that has added to an already dangerous situation in the Middle East.”

Meanwhile Wednesday, Hunter was among 150 co-sponsors of House Resolution 630 condemning and censuring Rep. Adam Schiff of California for an “ongoing public relations smear campaign against President Trump, including manufacturing a misleading representation of a phone call between President Trump and President Zelensky of Ukraine, simply for the purpose of justifying an impeachment inquiry in the House.”

In a statement, Hunter said: “This is really simple. When Democratic leadership in the House are so incessantly preoccupied with impeaching our president that they justify manufacturing evidence, the American people have a right to know and they should be held accountable.”

He said the House was getting nothing accomplished now.

“No transportation bills, no funding bills, nothing,” he said. “This town is completely focused on impeachment and Chairman Schiff is culpable in this by consistently spreading rumors based on no facts, and using his authority to cause damage to the president solely for political reasons.”

Hunter said he would take part in a joint news conference Thursday regarding the “lack of transparency by House Democratic leadership in the ongoing impeachment process.”

He said he wants all members of Congress to have access to committee hearings, depositions and interviews throughout the process. (Schiff says he'll release transcripts.)

Hunter himself has no committee roles, though.

Following his 60-count indictment on campaign finance misconduct charges in August 2018, he stepped down from his assignments as House Speaker Paul Ryan signaled he was removing him.

“In light of recent events, I am requesting to be temporarily removed from my positions on the House Committees on Armed Services, Education and the WorkForce, and Transportation and Infrastructure,” he wrote Ryan.

“I fully intend to resume my position as an active member of these committees upon a successful resolution of the pending legal matters.”

A 9th Circuit court appeal hearing aimed at dismissing charges is set Dec. 12 in Seattle and a San Diego trial is slated to start Jan. 22, 2020.

This man knows his best bet is a Presidential pardon. If Trump stood naked in front of him, Duane would praise his fine robe.