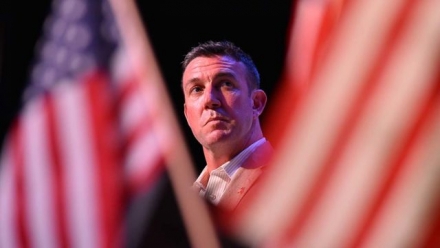 June 25, 2019 (San Diego) - Rep. Duncan D. Hunter has long accused the San Diego U.S. Attorney's Office of being out to get him for political reasons. Now his lawyers are hoping a motion filed Monday proves it.

Hunter wants his campaign funds misuse case thrown out — or the local Department of Justice office recused — on the basis of a single email he says shows that two assistant U.S. attorneys attended an August 2015 fund-raiser for Hillary Clinton as fans of the Democrat.

The Alpine Republican says he was originally told that assistant U.S. attorneys Alana Robinson and Emily W. Allen attended in their official capacity to assist law enforcement. So he filed a Freedom of Information Act request to see if a record existed.

On June 12, the Secret Service sent him a responsive document.

“The document conclusively proves that AUSAs Robinson and Allen attended the Clinton fundraiser for partisan political reasons to supply and obtain a photo with candidate Clinton and that their attendance had absolutely nothing to do with ‘assisting law enforcement,'” says the 22-page motion by Hunter attorney Gregory Vega.

In a redacted email from the Secret Service to the U.S. Attorney’s Office sent Aug. 5, 2015, two days before the Clinton event, the brief note says:

Hunter wants the federal judge in his case — Thomas Whelan — to order release of the unredacted email.

In the motion, Vega writes: “AUSAs Robinson and Allen surely hoped that the email would never see the light of day for if it did, the charade was over and the public would finally know the truth that the investigation of Congressman Hunter was political from the outset.”

Hunter’s lawyers say they’ll argue at a July 1 motion hearing that the evidence “now establishes without question that the assistant U.S. attorneys that initiated the investigation had a glaring conflict of interest and loss of impartiality that is intended to separate federal prosecutors from politically influenced decisions.”

Further, the filing says: “Any explanation the Government gives now for initiating the investigation of Congressman Hunter should be viewed with total skepticism through the lens of their attempts to cover up the partisan political activities of the prosecutors that initiated the investigation.”

On Tuesday, Vega told Times of San Diego that the only document received from the Secret Service in the FOIA request was the one redacted email cited in his motion. Vega also said Brewer’s name appeared on a Notice of Appearance by another assistant U.S. attorney now working on the case and that Brewer is recused from the Hunter case.

In a statement Monday, Hunter said: “Every San Diegan who has been following this politically driven prosecution should read the correspondence from the Secret Service that was revealed today. It shows conclusively that the two U.S. Attorneys who have driven this prosecution did so after attending a Hillary Clinton fundraiser and then covered up their political activities by claiming they were part of Hillary’s security team. The Secret Service correspondence shows that they came to the fundraiser event solely for political purposes.

“It is every American’s constitutional right to have equal protection under the law. It is clear by the prosecutor’s actions that they have a political bias that merits the court’s attention and consideration. The U.S. Constitution and federal law exists to protect us against these types of bias. Political agendas have no place in our courtrooms and when lies and their cover-up are exposed, accountable action should be taken.”

Hunter spokesman Michael Harrison said the six-term congressman would make no further statement on the matter “at this time,” adding that any further media inquiries be sent to Vega.

The Hunter motion says the investigation and prosecution fall within the reasoning of a Supreme Court holding in Young vs. United States to dismiss an indictment for the improper conduct of the investigating prosecutors.

The June 12 Secret Service response came a day before Hunter’s wife, Margaret, changed her plea from not guilty to guilty, saying she and her estranged husband spent more than $200,000 from his campaign kitty on personal items, family spending and vacations.

Ken Stone, and Thank you ECM for running both sides of this story!

He's certainly entitled to his defense.

That said, I suspect that people in many prominent positions such as prosecutors, Sheriffs, etc. get their photos taken with various prominent people they may meet or be called to protect at events. That alone probably won't be enough to prove bias. But even if  Hunter succeeds in getting different US attorneys or a new venue, the facts of the case are ultimately what a jury must use to determine his guilt or innocence.

The attorneys didn't make Hunter spend campaign funds inappropriately or falsify campaign reports as is alleged. He may find it difficult to convince jurors or a judge that overnighters with five women were legitimate campaign expenses, as he apparently claimed.

Even if this is proven true. It doesn't change the facts regarding what he and his wife did.