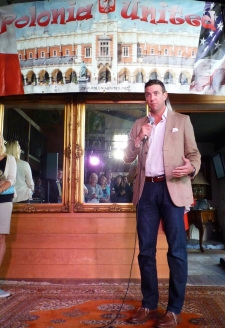 April 12, 2014 (La Mesa)—Polonia United, an organization of Polish Americans in San Diego, hosted a meet and greet with Congressman Duncan D. Hunter (R-Alpine) at a private home in La Mesa.

“I am proud to have fought for people who want to be free,” said Hunter, a veteran who has served multiple tours of duty in Afghanistan.Hunter spoke of the need for the U.S. to support its allies that value freedom including nations in Europe such as Poland, while guarding against those who seek to cause harm. 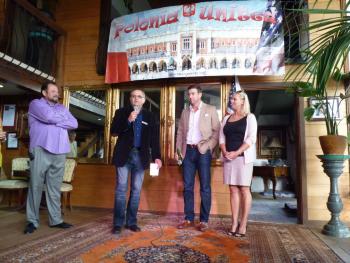 He voiced concern for the situation in the Ukraine and indicated a need to guard against entrusting leaders such as Russian leader Vladimir Putin.

He addressed other points, calling for a stronger manufacturing base for America and voicing a need for more veterans in Congress.

He also fielded questions from those in the audience.  Asked about loosening immigration restrictions to enable more Poles to come to America, Hunter emphasized that while immigration reforms are needed, security must take priority to prevent terrorists from entering the country.

Hunter found resistance to his views on energy policy.  He voiced support for “all energy sources” including nuclear, oil and fracking, indicating he did not believe the administration’s push for wind and solar would be adequate to meet America’s power needs.

A woman in the crowd fired back, “Fracking is terrible.”  Another voiced concern over  risks posed by nuclear.  ECM spoke privately with Hunter on fire hazards posed by a proposed wind project in East County by an energy company that has had

several turbines explode and cause fires elsewhere; the Congressman indicated he would look into the matter.

Hunter drew broader acceptance from those present when he praised the Polish people for their support of freedom and their strong work ethic. His wife, Margaret, who is Polish, also addressed the group with a bilingual talk in Polish and English. 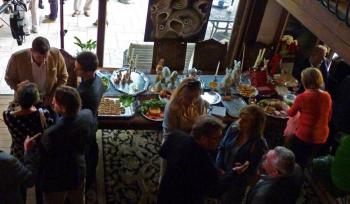 gle with fellow countrymen and ask questions of their Congressman.

A representative from Polonia United told ECM that the organization seeks to foster a sense of community among local Polish Americans and to reach out to our region’s public officials; Congresswoman Susan Davis has also been invited to speak at a upcoming Polonia United event.