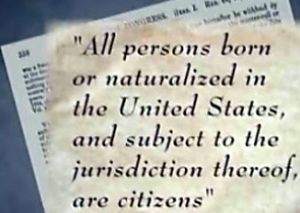 The 14th amendment was added to override the 1857 Dred Scott v. Sandford decision that denied African Americans citizenship. Children of slaves were granted protection by the amendment, which was written at a time when 13 percent of Americans were immigrants and there were anti-immigrant forces even then.

Thirty years later, when a challenge was raised to citizenship for children of Chinese immigrants, the U.S. Supreme Court reaffirmed that the 14th amendment applies to all children born in the U.S., regardless of their parents’ immigration status.

In that decision, Wonk Kim Ark v. United States, the Supreme Court also made clear that Congress has no right to alter this constitutional protection.  The decision states that the high court “has conferred no authority upon Congress to restrict the effect of birth, declared by the Constitution to constitute a sufficient and complete right to citizenship.”

Rep. Hunter (D-Alpine) in 2010 backed a bill that would have limited citizenship only to children with at least one parent who is a citizen, or naturalized resident, or a member of the military.  His bill would have stripped not only “anchor babies” or children of undocumented immigrants, but also children born to parents here on travel, work or student visas, refugees and others.

Those seeking to deny immigrant children citizenship focus on the words “subject to the jurisdiction” in the Fourteenth Amendment.  But a well-researched article in the Atlantic explains that this does not apply to immigrants.

If any constitutional amendment could be changed by a president’s executive order or a simple act of Congress, than no constitutional protection would be save from the political whims of each new Congress or president.

Gun rights, free speech, religious freedom, women’s right to vote, freedom from unreasonable search or seizure and a host of other cherished protections would all be subject to repeal.

Changing the Constitution requires not only a vote by both houses of Congress, but also ratification by legislatures of two-thirds of all states.  Our founding fathers made it difficult for a reason, to protect the liberties that Americans hold dear.