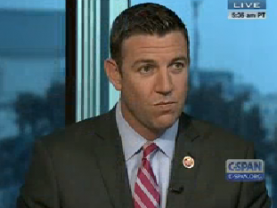 December 8, 2013 (San Diego’s East County) Updated 8:40 p.m. – Congressman Duncan D. Hunter (R-El Cajon), a member of the House Armed Services Committee, has long been known as a hawk on military matters.   But in an interview on CSPAN’s Washington Journal this week, the former Marine went further, voicing support for use of "tactical nuclear devices" if the U.S. launches an air strike against Iran. He backed use of tactical, or non-strategic nuclear weapons to set Iran's reported effort at developing a nuclear weapon "back a decade, or two or three."

Hunter, whose San Diego region district includes over 80,000 Middle Eastern immigrants, also ignited controversy when he stated,”In the Middle Eastern culture, it is looked upon with very high regard to get the best deal possible, no matter what it takes. That includes lying.”  (View video of full interview.)

In an e-mail to ECM, Hunter's Chief of Staff Joe Kasper advised that Hunter never actually called for a strike against Iran, but rather meant that "if action is ever needed, boots on the ground is unrealistic. We don't have conventional resource to do the job. That leaves specific devices to penetrate bunkers, etc.  That is not a situation we ever want to be in, wtih that the only option if needed, underscoring why Iran should have less and not more room to weaponize." (Note: An earlier version of this article has been updated after receiving Kasper's clarification.)

“These are not the words of an American statesman, nor should it be acceptable language for a member of Congress to suggest that a preventive, first-strike attack against Iran would be an appropriate policy,” the editorial stated, noting that even a conventional air attack would “inflame already explosive tensions in the Middle East and a spark a regional war that could easily rage for decades. To drop nuclear bombs as part of a "massive aerial bombardment campaign," furthermore, could risk the scale of death and destruction seen in U.S. nuclear attacks on Hiroshima and Nagasaki.”

James Kimber, a Democrat and a physician, has announced plans to run against Hunter in the 50th District.

“Mr. Hunter’s remarks are incredibly irresponsible at a time when the administration is trying diplomacy with Iran,” Kimber wrote in an e-mail sent to supporters.    He added that Hunter’s comments show “ignorance or arrogance”  by suggesting that nuclear weapons could be used without “thrusting the rest of the world into conflict.”

Ben Kalasho is president of the new San Diego-East County Chaldean American Chamber of Commerce, representing Chaldean Christians from Iraq.  Kalasho told 10 News that Hunter should apologize for his remarks.  “It’s not in good taste t all.  I think a lot of people will take offense to that, “ said Kalasho, a Democrat who has applied to fill a vacancy on the El Cajon City Council.  He added that many Middle Easterners are “sickened”  by the notion of violent sucide bombings.

The American-Iranian Council has launched a petition calling  on Hunter to apologize.  Thus far, 1,608 people have signed.   Signatures include Jeanne Hunter of Santee, who posted,  “Stop this insane rhetoric about nuking other nations. I find your analysis reckless and appalling!"

In recent days prominent conservatives have been largely silent on the controversy, suggesting even many pro-military Republicans may view Hunter’s support for use of nuclear weapons as extremist.

One notable exception is Sheldon Adleson, a top political donor to Repulibcan candidates. Defense News reports that back in October, Adleson also called on the U.S. to deploy a nuclear weapon against Iran, though he favored  using a nuclear bomb in a relatively remote location as a warning for Iran to cease its nuclear program.

Some prominent political leaders have, however, indicated concerns over the potential threat that nuclear weapons in the hands of Iran's leader could pose to U.S. forces, Israel or other U.S. allies.

In July 2012, the United States State Department released a report on terrorism around the world in 2011. The report states that "Iran remained an active state sponsor of terrorism in 2011" and  "continued to provide financial, material, and logistical support for terrorist and militant groups throughout the Middle East and Central Asia." The report states that Iran has continued to provide "lethal support, including weapons, training, funding, and guidance, to Iraqi Shia militant groups targeting U.S. and Iraqi forces, as well as civilians." Iran has also backed forces that support the Taliban in Afghanistan and provided arms to Hezbollah.

The Federation of American Scientists has predicted that  launching the least powerful tactical nuclear weapons in the U.S. arsenal would "blow out a huge crater of radioactive material, creating a lethal gamma-radiation field over a large area."

The scientists indicate that if the U.S. were to use a more powerful tactical nuclear weapon, like the B-61, th explosion could be many times more powerful than  the atomic weapon the United States dropped on Hiroshima, incinerating numerous Iranian citizens in urban centers near the nation’s nuclear facilities.