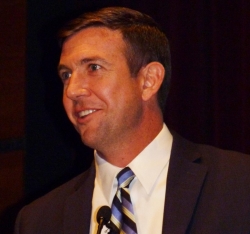 October 15, 2014 (Washington D.C.)—For the past 28 years, the Washingtonian has surveyed Congressional aides about the leadership qualities (or lack thereof) of House members in its “Best and Worse of Congress” annual report .  While some districts’ representatives achieved such honors as being named the top workhorse , rising star or wisest member of Congress, the designation as the top “party animal” in the House  of Representatives was awarded to 50th Congressional district Representative Duncan D. Hunter (R-Alpine).

That’s after House Speaker John Boehner reportedly asked certain House members to refrain from partying with lady lobbyists, Salon reported in 2010. The article cites the New York Post and reports that lobbyist Glenn LeMunyon, a former staffer for disgraced Congressman Tom DeLay, has been hosting after-hours house parties at his home for female lobbyists to socialize with legislators.

The publication lists a handful of Congressional Republican members who have reportedly frequented LeMunyon’s gatherings—including Congressman Duncan D. Hunter, who ran on a family values platform and whose district includes parts of San Diego and East County.

Those Congressional party animals have not been accused of any unlawful activities, it should be noted.

The Washingtonian has this to say about the results of this year’s survey of Congressional staffers, published earlier this month, however:

“Despite approval ratings lower than Vladimir Putin’s, the men and women of the 113th Congress have continued to debate, investigate, raise funds, and campaign with ebullience. Seeing as little if any legislation arises from their activities, it’s apparent that if there are winners and losers, hits and misses, the average citizen isn’t privy to the scorecard.”

The comparison to Putin is unfair... to Putin.
They should all party. Better than the crazy laws they pass. Long Live Big Brother!