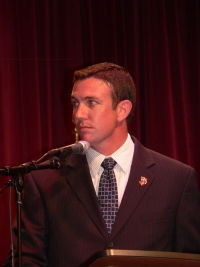 Update: There will be no special election due to the timing of Hunter's resignation and the high cost of a special election, given that this race is already on the March primary ballot and November general election.  Federal law requires both primary and run-off elections to fill a Congressional vacancy.

Hunter’s District Chief of Staff Michael Harrison informed ECM that services for constituents will not be interrupted.  ““The office will remain open throughout a vacancy, no matter how long it may take.  Constituents can continue contacting the office with any of their needs, they also have Senators Feinstein and Harris as resources as well,” he stated in an e-mail today.

Ten candidates have filed to run for Hunter’s seat in the March primary election. The top two will advance to a run-off election in November, so the seat will be vacant until a new representative is sworn in, in January 2021.

The Republican Congressman’s resignation letters cite his service first as a Marine combat veteran in Iraq and Afghanistan and later, in Congress, where he was elected in 2008 to fill the seat formerly held by his father. He praised his father, Duncan Hunter, and growing up I East County for instilling values of “liberty, the value of patriotism, and what a strong and secure border can bring to a community.”

Hunter's letters made no mention of his guilty plea to conspiracy to spend campaign funds on personal use, nor of being stripped of voting rights in a bipartisan vote by the House Ethics Committee.

He spoke of the constituent service provided such as aiding veterans and Social Security recipients to receive benefits.  As Chairman of the Early Childhood, Elementary and Secondary Education Subcommittee, he says he worked to empower parents with more choices in where to send children to school and advocated for college transparency.

He also served as Chairman of the Coast Guard and Maritime Transportation Subcommittee, where he says he worked to protect the Jones Act assuring a strong maritime industrial base and prioritize modernizing our nation’s ice breaker fleet.

“Perhaps the contribution  I am most proud of is giving a voice to the men and women in uniform,” Hunter states. As a Member of the House Armed Services Committee, he says he worked to assure war fighters had resources needed for their missions. He also recalled his efforts to fight for “warriors” he felt were treated unfairly by the military justice system, an action that sometimes sparked controversy as with his outspoken defense of Eddie Gallagher, a Navy Seal charged with war crimes but later acquitted of the most serious charges.  “I will always be proud to stand with the men and women who protect our freedoms, “ Hunter states.

His resignation letters conclude, “It has been an honor to serve the people of California’s 50th District, and I greatly appreciate the trust they have put in me over these last 11 years.”