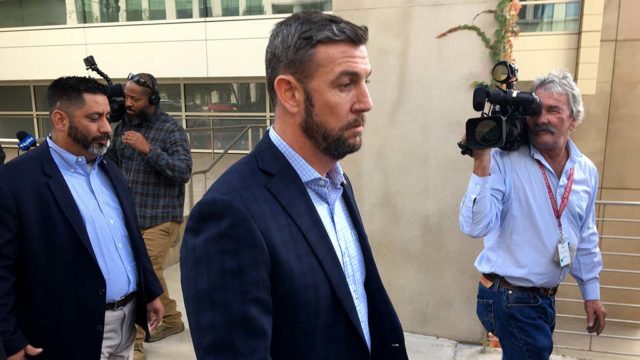 Hunter and his wife, Margaret, were charged with 60 federal counts including spending over $250,000 in campaign funds on personal uses and falsifying campaign finance reports to cover up the misuse of funds.  The expenditures included family vacations, overnight trysts with female lobbyists and Congressional staffers, jewelry, videos, oral surgery, tuition at their children’s school and airfare for a pet rabbit.

Margaret Hunter changed her plea to guilty on one count earlier this year and has been cooperating with prosecutors.

Details will become available during tomorrow’s hearing. However it is likely that Hunter may have reached a plea agreement with prosecutors to drop most charges and lessen potential prison time in exchange for avoiding a trial. A guilty plea would likely also include a requirement for Hunter to resign from Congress and not seek reelection, though this has not yet been announced.

Until now Hunter had steadfastly insisted he was not  guilty but was instead a victim of a partisan witch hunt.

On KUSI, Hunter explained his change of heart this way.  “It’s important not to have a public trial for three reasons, and those three reasons are my kids.”  He also stated , “My only hope is that the judge does not sentence my wife to jail,” a tacit acknowledgment that the Congressman may be prepared to serve his next term in prison, not Congress.

Another possibility would be for President Donald Trump to pardon Hunter, a long-time and early supporter of Trump.

Hunter, a Marine Corps combat veteran, has been in Congress since 2011, representing the 50th Congressional district.  A guilty plea  to a felony count would empower the House of Representatives to remove him from office if he did not resign.  A vacancy due to resignation or removal would normally trigger a special election, but that would almost certainly be consolidated onto the March primary ballot followed by a general election, leaving constituents potentially without representation for several months.

Hunter has already been removed from his committee positions including the House Armed Services Committee on which he and his father before him have long served.

“While this must have been a tough decision for him, Congressman Hunter’s decision to plead guilty is the right one for his family and his constituents and shows that no one should be above the law - especially members of Congress. My thoughts and prayers are with the Hunter family as they go through this difficult process.”

"Today is a sad day for this district because no constituent hopes to see their congressman plead guilty to corruption. But today is also a day filled with opportunity because it’s the first time in years people, not political scandals, will come first again.

Right now, we need a bi-partisan local leader to restore integrity, the public trust and bring people together to deliver results. I’m going to take a fresh independent approach to fight for affordable housing, healthcare, education, wildfire relief and prevention, and infrastructure reform. On day one I will focus on the same working folks who are funding my campaign and not for the corporate special interests in D.C. who own Congress or bankrolling the career politicians in this race who aren’t from here and don’t know the first thing about the struggles of the East County families I grew up with.

My thoughts are with Major Hunter and his family, I want to thank him for serving our country."