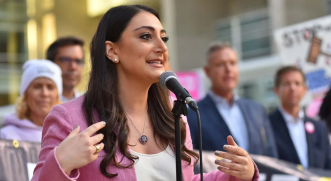 July 16, 2022 (Washington, D.C.) - Rep. Sara Jacobs of San Diego joined with three other Congresswomen Friday in advancing a bill to protect women’s rights to use contraceptives in the wake of the Supreme Court ruling overturning Roe v. Wade.

In a concurring opinion on the controversial abortion ruling last month, Justice Clarence Thomas recommended that the court also overturn federal rulings protecting the use of contraceptives and gay marriage. Some conservative Republicans lawmakers have publicly backed those ideas.

“As a young woman, reproductive health care is my health care. And like all reproductive rights, the right to contraception is vital to our wellbeing and our freedom,” said Jacobs, who represents the 53rd District in central San Diego County. “I’m proud to co-lead the Right to Contraception Act.”
Jacobs was joined by Democratic Reps. Kathy Manning of North Carolina, Nikema William of Georgia and Angie Craig of Minnesota.
The proposed legislation would create a federal statutory right for people to obtain contraceptives and engage in contraception. It would also protect specific contraceptive methods, devices, and medications used to prevent pregnancy, including oral contraceptives, emergency contraceptives, and intrauterine devices.
Majority Leader Steny Hoyer of Maryland said the bill will move to the House floor for a vote next week.
The use of contraceptives was banned in some states prior to a 1965 Supreme Court ruling. Thomas has proposed overturning this ruling and returning the issue to the states as with abortion.
Alexis McGill Johnson, president and CEO of the Planned Parenthood Federation of America, thanked the four congresswomen for advancing the contraceptive legislation.
“They’re not just coming for abortion — they’re coming for contraceptives, LGBTQ+ rights, and more,” said Johnson. “While birth control is no substitute for abortion access, access to contraception is critical to control our own bodies, reproductive health care, and futures.”