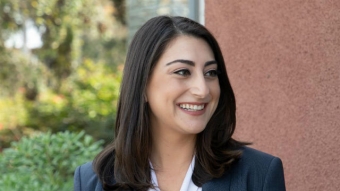 June 18, 2021 (Washington, D.C.) - Rep. Sara Jacobs of San Diego has been named to the new House Select Committee on Economic Disparity and Fairness in Growth — one based on an FDR panel in the Great Depression, her office said Wednesday.

The 53rd District rep is the sole Democratic freshman and one of just eight Democrats to serve on the select committee, which will focus on the widening wealth and income disparity in the United States, said a news release.

“I am honored and humbled to be appointed by Speaker Pelosi to the select sommittee,” Jacobs said in a statement. “As we prioritize an equitable recovery from this pandemic, I am especially grateful to be focusing on the future of work — on the care economy and emerging technology — and on international development and global poverty.”
The committee is modeled after the Temporary National Economic Committee established by President Franklin Roosevelt and Congress in the 1930s.
The panel will study and recommend policies to “make our economy work for everyone, ensuring that no one is left out or left behind as the economy grows,” Jacobs’ office said.
Washington Post columnist David Ignatius noted the committee would be chaired by moderate Democratic Rep. Jim Himes of Connecticut.
“The basic idea, she told me in a recent interview, is to create a forum that can bring together representatives from all sides: Rust Belt districts harmed by plant shutdowns, urban districts ravaged by racial injustice, rural districts where farmers are suffering from drought, and districts across the country where young people are struggling with debt, low-wage jobs and an uncertain future,” Ignatius wrote.
“The whole point is to make sure that people are listened to,” Pelosi told him. “We have a patriotic obligation to find common ground.”
He said a “Dear Colleague” letter she planned to circulate late Tuesday would say the aim of the committee was “to intervene in the increasing divide” that separates the parties and the country.
Over the next 18 months, Ignatius said, Himes plans to hold hearings and issue a report.
“The committee will look at the fairness effects of the tax code, globalization, regulation and the quasi-monopolies of today, such as Google and Amazon,” the columnist said. “The evidence of inequality was sharpened by last week’s revelation of IRS data showing that CEOs such as Warren Buffett of Berkshire Hathaway and Jeff Bezos of Amazon pay a tiny fraction of their immense wealth in taxes.”
Other Democratic members include Reps. Marcy Kaptur of Ohio, Gwen Moore of Wisconsin, Angie Craig of Minnesota, Alexandria Ocasio-Cortez of New York and Pramila Jayapal of Washington state.
House Minority Leader Kevin McCarthy of California “plans to select members to serve on this select committee. Names will be announced in the near future,” said a spokeswoman.
In selecting Jacobs, Pelosi noted the 32-year-old member will be “focusing on the future of work with both a family and a global perspective” in addition to her wider work on the committee.
“We must end the health, economic, and environmental injustice that affects people’s lives, and it must be done soon,” Pelosi said. “The priority of addressing wealth and financial disparity is a broad one, encompassing many concerns and constituencies. That is why I am proud to name members to the committee who reflect the array of these challenges. With this committee, we can Build Back Better in a way that ensures liberty, prosperity and opportunity for all.”
Prior to Congress, Jacobs worked at the State Department and the United Nations, and founded a nonprofit aimed to ending the experience of child poverty in San Diego.
She currently serves as a member of the House Armed Services Committee and the House Committee on Foreign Affairs, and in Congress has focused on child care and child poverty, the future of work, and a new American foreign policy.
“To have millions of children experiencing poverty, vast disparities in wealth, and so many who can’t survive in our current economy is both a moral and a policy failure,” Jacobs said. “And while the work of this Select Committee will rightly center the voices of those who have been left out or left behind, it cannot only be their voices calling for change. It is on all of us, especially those of us who have benefited from the system as it is, to push for a fairer and more just America.”
She added: “I’m looking forward to working with my colleagues to develop a data-driven agenda to address inequality, build equity, and make our economy fairer.”